Margaret Josephs is telling all in her upcoming memoir — including about her rarely mentioned biological son.

The Real Housewives of New Jersey star, 54, appeared on The Wendy Williams Show Wednesday and told the host that many people don't even know about her child with ex-husband Jan Josephs.

"Everybody knows 25, 30 percent of my life," Margaret said, noting that the book, Caviar Dreams, Tuna Fish Budget, will explore the parts of her that fans can't glean from watching Housewives.

"I had a 20-year marriage to my first husband, I have a natural-born son people don't know about," she continued. "Everybody always thought I never had children but I have my own son."

Josephs married Jan in 1994 when she was 24. Being 20 years older than she, Jan had three children from a previous marriage — ages 8, 14 and 16 at the time they wed — and had full custody of his kids.

"They needed someone to love them and I was completely obsessed with them," Margaret told PEOPLE in 2018 of the three, who are now all in their 40s. "And then we had my son and they were my entire life."

Though Josephs seldom speaks about her son or her stepchildren on RHONJ, she told Wendy Williams this week that she and Jan remain "amazing friends and amazing co-parents."

Her most recent mention of her son came on Twitter last month, when a fan of the Bravo series said that Josephs' children are "not her real kids."

"I have a biological son that everyone on the cast knows about and we are very close," the reality star wrote in response. "So please stop with the sweeping false statements about my 'real children' my step children are also my children I raised them."

RHONJ's Margaret Josephs Says She Slept with a Boss Early in Her Career: 'You Felt Very Pressured'

But Josephs also previously told PEOPLE that her decision to leave Jan in 2013 for her current husband Joe Benigno added tension between her and her stepchildren. Though her son still communicates with his half-siblings, Josephs said in 2018 that it had been years since she had spoken to them.

"I know they don't hate me," Margaret said at the time. "They're holding a grudge. And it doesn't make it any easier. But I know in my heart we'll find a way back to one another. I'd die over them."

"It's an ache no one can fill. It's heart-wrenching," she continued. "They were my whole life. We had every Sunday dinner, bar mitzvahs. … Not knowing what they're up to, it's so weird. I pray every day and I write to them constantly. It's not like they don't acknowledge me with thank yous. But it's just not the same." 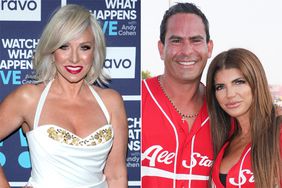