"I should be much further with all my businesses. Like, I built up a lot. And then everything came crashing down because of the legal stuff," Teresa Giudice said

Teresa Giudice made an emotional revelation on Wednesday’s Real Housewives of New Jersey, as she opened up about the financial strain her and Joe Giudice‘s ongoing legal battles had put upon her.

The reality star and mother of four, 47, was on vacation with her RHONJ castmates and their spouses when she got candid about the behind-the-scenes battles she’s been tackling.

Teresa has previously said that her businesses — like her best-selling line of cookbooks and Fabellini wines — took a dive in the wake of her return from prison in December 2015, after serving a little over 11 months for mail, wire and bankruptcy fraud.

In addition, the funds she was making were going towards settling up with creditors in her bankruptcy case, and helping fund Joe’s efforts to overturn his ongoing deportation case.

“I guess I have resentment for that too,” Teresa said on Wednesday’s episode, after pal Dolores Catania pointed out how she “never said no once for Joe” when he asked for “lawyers, lawyers, lawyers” and “money, money.”

“Like, I should be much further with all my businesses. Like, I built up a lot,” Teresa said. “And then everything came crashing down because of the legal stuff.”

As if that weren’t enough, Teresa said she’s also had to deal with the pain of not being around as much for her daughters as she’d like to be, instead focusing her time on work opportunities to make money for her family.

At the time of Wednesday’s episode, Teresa was the sole breadwinner for the Giudices.

Joe was living in an Immigration and Customs Enforcement detainment center, where he was transferred to in March 2019 following the completion of his 41-month prison sentence. He had hoped to have been home by then and making money for his family, but he was instead fighting his deportation order, having never obtained American citizenship after moving to the U.S. as a young child.

“You know what Milania did say the other day, which made me feel really bad? Milania’s like, ‘Mom, I don’t care about money. I want how it used to be,’ ” Teresa recalled. “It’s sad. I worry every day about my kids.”

Since then, Joe has moved to Salerno, Italy, to wait out the final deportation decision.

He and Teresa also made a big decision, PEOPLE breaking news of their separation exclusively back in December.

“They agreed that each had to move on,” a source close to the family said at the time. “They are doing so amicably and very slowly. Joe has been out on a few dates, Teresa has not. She has been too busy with the girls, with work obligations and taking care of her father. She is happy for Joe. They have been very friendly with one another and are very supportive of each other’s happiness. They still love one another, but … neither is interested in a long-distance relationship.”

That love for their family has been apparent on social media, where Teresa and Joe have both stayed active, praising their kids and even sending supportive messages to one another.

“He texts me all the time, ‘I love you, I adore you, you’re the best mother,’ ” Teresa told PEOPLE Now on Feb. 5. “Listen, I’ll always have a special place for him in my heart. … We want the best for each other. I want him to be happy, he wants me to be happy. And that’s it. We’re going to be the best parents we could to our four daughters.”

As for dating in the future, Teresa said she hasn’t started that yet, but she’s looking for a kinder guy who will be more affectionate towards her. 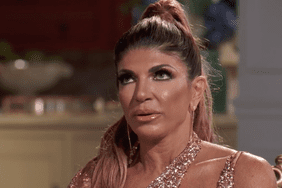 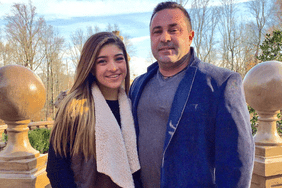 'RHONJ' : Teresa Giudice Says Joe Giudice Blamed Her for Him Not Becoming an American Citizen