'RHOBH' : Erika Girardi Reveals Why She Filed for Divorce from Tom — 'I Couldn't Live That Way'

"I just kept walking around that house and knowing that this marriage was headed down a really s----- path, I had to make a choice," Erika Girardi said

Erika Girardi is opening up about why she chose to divorce her husband, Tom Girardi, after 21 years of marriage.

Picking up where thing's left off last week, Wednesday's episode of The Real Housewives of Beverly Hills began with the cast greeting Erika at Sutton Stracke's Parisian-themed party. As the group sat down at the table and enjoyed a meal together, Erika decided to address "the elephant in the room" regarding her sudden divorce filing.

Erika then explained what caused her to ultimately call it quits.

"I left because he pushed me further and further out," she said during a confessional. "The conversations that I used to have were now reduced down to a sentence or two. I just kept walking around that house and knowing that this marriage was headed down a really s----- path, I had to make a choice to do what was right for me. I couldn't live that way anymore."

Erika explained to the bunch that she didn't tell them what was really going on in her marriage "on purpose" because it would have put them "in a bad position."

"I didn't want to do that and that's the truth," she explained. "It also doesn't serve me to talk a lot about what is happening legally or will happen legally because I am married to somebody who's very good in that area."

Erika revealed in a confessional that she "struggled for a long time" with knowing that she needed to end her decades-long marriage. Once she reached her decision, she subsequently "spent a good 30 days closing out certain parts" of her life.

"I cried every day," she admitted. "This was the end of a massive part of my life, stepping into basically a void."

Even after she claimed to have "tried to talk and tried to work it out" with Tom, Erika told the cast that she was "met with such resistance to such resistance" in return. The reality star also said that she struggled with having honest conversations with Tom about her feelings as it "was always dismissed."

Later in the episode, Erika showed a glimpse at how her new downsized house — valued at $1.5 million — was coming together.

"After finding a place to go to, I dropped him off at work and I went home and moved out," she said in a confessional. "I was out within the day. It's frightening, you know, when you think about it."

She added, "It's the uncertainty and the instability of being, you know, really out on your own. So to all of a sudden live somewhere else and know that you're never going home, you know, for now, this is home. Hope you chose wisely, this is it."

Erika said that "getting up the courage to leave is a big deal," especially since she lived at Tom's Pasadena, California, mansion for 21 years. "There's always that underlying pressure of wanting to please someone that's provided for you," she said. "And I felt always that I should shut up and be grateful to an extent."

RHOBH: Erika Girardi Addresses Her Divorce from Tom - 'It's So F------ Complicated'

Over dinner with Lisa Rinna, Erika further opened up about "what's really going" on amid her divorce.

"It's insanity. I've not felt this vulnerable in maybe never," Erika said. "I really tried and talked and attempted. So he left me no room, and that's the only way I can say it right now."

Erika then admitted that she "almost floated the idea of trial separation," but she didn't think it would work. "I didn't leave a note," she said before Lisa, 57, asked, "You just left? And then served [the divorce papers], he got served?"

Erika nodded her head and added, "I drove him to work and I told him I loved him. And he said, 'Thanks, hun,' like I was an employee." That day was the last time she saw Tom, she revealed.

"I went home and started putting everything in the moving van," she told Lisa. "I drove off, went to my new place, spent the night there and he was served the next morning."

Erika filed for divorce from Tom, 82, last November. The attorney has since been connected to multiple lawsuits, one of which includes Tom and Erika being accused of embezzlement. Their legal woes are now the subject of an ABC News Originals documentary, titled The Housewife and the Hustler. Around the release of the documentary, Erika's attorney's asked the court for permission to withdraw from being her counsel, then retracted that motion shortly after. 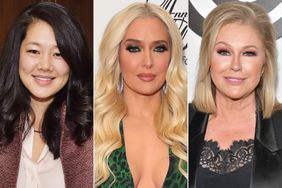 'RHOBH' : Erika Girardi Says Tom Could Be 'Overly Dismissive' — 'I'm Sure He's Mad at Me' for Divorce

'RHOBH' : Erika Girardi Claims She 'Found the Evidence' of Ex Tom's Infidelity — 'He Was Sloppy'