Which Character Died on 'Revenge' to Save the Life of Emily Thorne?

A character we've known since the beginning receives their "Atonement"

As seems to be the tradition for midseason finales (looking at you, The Walking Dead), a major character bit the dust on Sunday’s Revenge.

SPOILERS are below, obviously.

As the episode title foreshadowed, Daniel (Josh Bowman) received his “Atonement,” of sorts, when he sacrificed himself to save Emily (Emily VanCamp).

The son of the most hated man in America, Daniel dove in front of a bullet meant for Emily fired by FBI agent Kate (Courtney Ford).

Undeterred, Kate aimed for her target once again before her boyfriend, Jack (Nick Wechsler), arrived in the nick of time to stop her by killing her.

It was only fitting that Emily was saved by her two former loves, and that Jack remains, as ever, hilariously unlucky in love. Better luck next time, buddy.

Given that Daniel once shot his ex-wife after finding out that she lied about her pregnancy, it only seems fair that he took a bullet for her. Eye for an eye, and all that.

In a moment as touching and romantic as Revenge will ever get, Emily revealed to Daniel as he bled out in her arms that their relationship was not entirely a lie.

While Daniel died a hero’s death, it’s difficult to forget his past misdeeds. However, he’s in pretty good company on Revenge, a show in which basically everybody has a secret, an agenda, and an itchy trigger finger.

Given Emily’s true feelings for Daniel and the reveal that Kate is actually the daughter of the mysterious Malcolm Black, we can only assume that Revenge will return in January with Emily more hellbent than ever on destroying him. 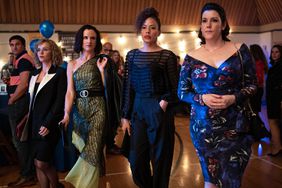