After a season of intense arguments and shifting friendships, the ladies of The Real Housewives of Potomac have a lot of drama to unpack — and PEOPLE has an exclusive First Look at all the juicy blowouts from the two-part reunion.

Gizelle Bryant, Ashley Darby, Robyn Dixon, Karen Huger, Charrisse Jackson-Jordan and Monique Samuels are all back for the catch-up, and each lady brings her own gripes to the table.

The biggest conflict appears to involve Grand Dame of Potomac Huger and Jackson-Jordan, longtime friends who had a few falling-outs this season (who can forget their big Bahamas brawl?). This time, each Housewife throws shocking accusations about the others’ relationships.

“You’ve been dating three men and it don’t look good in the street of Potomac,” Huger tells Jackson-Jordan, who is separated from husband Eddie Jordan but not yet divorced.

“People say you have a boyfriend. Do I talk about that? Blue Eyes or whatever his name is?” Jackson-Jordan shoots back.

That doesn’t sit well with the happily married Huger, who has been with her husband Raymond for more than 20 years. “You’re a f—ing liar,” she says.

Darby has an opinion, too, alleging that Jackson-Jordan previously hosted swingers parties. “I did hear you used to have some interesting parties Charisse,” she says. “And apparently it didn’t stay platonic.”

But Jackson-Jordan and Huger are not the only two whose fidelity are being questioned. Jackson-Jordan also turns her ire to Bryant, claiming the divorced mother of three had an open relationship in her past marriage.

There’s no telling how Bryant takes that — but she has other fish to fry, once again clashing with season-long rival Samuels. “People go to people’s houses and talk trash, that’s what they do,” she says at point, defending her behavior in one of this season’s most talked-about moments.

Samuels response? A simple, “No they don’t!”

Elsewhere in the episodes, suspicions surrounding Huger’s move are revealed, Dixon calls out Darby for meddling in her relationship, and Monique drops a sassy freestyle rap that ruffles everyone’s feathers.

And when the husbands join the stage, the OMGs really show up as Dixon’s ex-husband Juan finally tells his side of their controversial relationship and Darby drops an explosive secret about her and Michael that leaves jaws dropping. 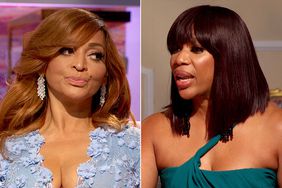