“I was in high school when my mom got diagnosed with a life-threatening illness,” the Real Estate Wars star, 30, tells PEOPLE. “My older brother was off at college and my little sister was a newborn, so I felt responsible for helping take care of the family — but I felt useless.”

Hajirnia has decided to keep the specifics of her mother’s illness private but the Bravo reality show personality says watching her mother suffer led her to find a way to control at least one aspect of her life: what she ate.

“I turned to anorexia,” the Southern California native says of developing the eating disorder during her senior year of high school.

“I tried to hide it because I didn’t want anyone feeling sorry for me, but everyone knew,” explains Hajirnia. “Everyone nominated me for homecoming queen thinking it would make me feel beautiful. It was sweet, but it didn’t help.”

RELATED VIDEO: Naya Rivera Reveals She Battled Anorexia as a Teen, Had an Abortion While on ‘Glee’

But as she graduated high school, Hajirnia says she realized how much she was “hurting” her parents.

“I decided to give eating a shot, but I felt so guilty for eating and that’s when I discovered bulimia,” she says. “I was making my parents happy because they knew I was eating, but in reality I was binging and purging, which is one of the most disgusting things a person can do to themselves.”

After four years at Cal State Fullerton, Hajirnia graduated at the top of her class with a degree in journalism with a focus on communications. She started working in the newsroom at the ABC affiliate in Los Angeles — but all the while continuing to binge and purge.

“I tried to avoid going to family events so I wouldn’t have to see them while I was at my worst,” she says. “There were times I was throwing up 10 times in one day. I would just lock myself in my room and do that all day.”

Her family urged her to seek professional help, but Hajirnia says she wasn’t ready to get healthy.

“Again, I was just doing it to please my parents. I wasn’t ready to get better, so I was lying to all the doctors I was seeing. I was making things up to make them think I was okay,” she says.

But her bulimia progressed and by 2010, “it got to a point where the food was putting me to sleep, so I was just binging and not purging. I got really disgusted by myself,” she says. “I didn’t recognize the person I’d become and I was really worried about my teeth and my well being, so I decided I was ready to get help.”

RELATED VIDEO: YouTube Star Lindsey Stirling On Overcoming Anorexia: ‘I Knew I Could Be Happy Again’

That happier place included a career change (from journalism to real estate) and an engagement in 2012 to her boyfriend of seven years.

Hajirnia had only told her immediate family, fiancé and trainer about her eating disorders until recently when she decided she could help others by sharing her story.

“Any time I’d talk about it I could just feel like a cloud was over me for the next day. I’d become depressed,” she says of talking about her anorexia and bulimia in the past. “No one ever wants to talk about the worst years of their lives, but I told myself I was going to do it because if I can just help one person out there I feel like I’ve done my job.”

She’s had to get veneers because the bulimia had wrecked her teeth but now Hajirnia considers herself to be “healthy” and is looking forward to her wedding, which is tentatively slated for late 2018 — but she admits the work on herself is not done. 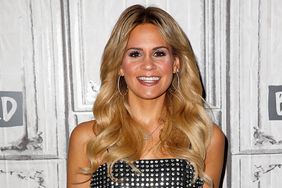