Rachael Ray: On the Rocks!

It’s well established that Rachael Ray can take the heat of any kitchen — but what about the cold of a frozen kitchen? Not a problem. On an episode airing Thursday, Ray put her entire talk show on ice, complete with a Zamboni ride, visits from cool guy Denis Leary, Emily Hughes and New York Ranger Adam Graves, an ice-carved couch, waddling penguins and even a stove made of ice, which Rachael used to cook potato soup to warm up with.

We chatted with the talk show host … and her husband John Cusimano … to find out why she decided to chill out out for a day, how she’ll spend Valentine’s Day and why she first thought her husband was gay:

How did you come up with the concept to do the show on ice? We came up with it as a group. I was complaining that I never get out and do anything and I’m always asking John to take me out ice skating, so it kind of brought it together and made it into a fun day.

Well, was it fun — or just cold?It was blast! It was great! I love Denis so much. He was one of our favorite guests of last season so we were happy to have him back and the little penguins — who doesn’t love little animals and cooking on ice? It was amazing.

What do you and your John plan to do for Valentine’s Day? We always just stay home and cook. And we love our dog as much as we love each other so we stay home with her.

What kind of dog is she? She’s an American rednose pitbull terrier named Isaboo. Isabella is my favorite name for and I never have enough time to have a human one.

Does that mean you want to have kids one day? Who would have time for that?… Probably not. That’s why we do so much for kids with our Yum-o! charity. I got the five jobs so it’s a little rough. I feel like a bad mom to my dog! But never say “never.”

How did you and John meet? Rachael: This is actually pretty funny. We were at a party with a lot of really tall and we are both so short. We saw each other right away and John, tell them what sold me on you.

John: You asked me if I cooked anything and she thought I would just say chicken parm or something boring and I said “Yeah, I made this talapia with a tomatillo-jalapeno-cilantra reduction with a little bit of Negro Modelo beer with a maque choux on the side.” And she said, “Are you gay?”

Rachael: I was going to hook him up with some of my gay friends and then when he said he wasn’t, I said, “Alright I’m going to be eating some of that food, and we’ve been together ever since. We cook together every night. I’m only Italian from the stomach down — John’s one hundred percent! –Lauren LazarukLFI 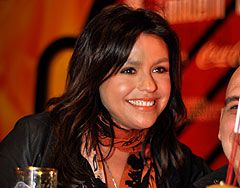