Nikki Bella made sure her fiancé Artem Chigvintsev felt extra loved on his birthday.

On Friday, the Total Bellas star, 36, shared a sweet post in honor of her soon-to-be husband's 38th birthday, including some of her favorite photos of the pair spending time together.

"I love you so much! You are such a bright light in my life. ✨ Thank you God for him! ❤️," the mom-to-be continued. "Excited for many more birthdays, journeys, travels, and experiences together... and with our baby boy. 💙"

The pro wrestler, 36, included several heartwarming photos of the couple holding hands and kissing, as well as an image of the two looking lovingly at one another while Chigvintsev holds his fiancée's baby bump.

Bella also shared birthday wishes for Chigvintsev on her Instagram Story, where she featured more candid photos of the pair and a few solo pictures of the Russian dance pro.

"Starting the birthday adventures, cheers to the birthday boy," Bella said in a video on her Instagram Story of the two clinking their cups of strawberry lemonade together.

"I love you click! Hope you have a very happy birthday!" she captioned a sweet selfie of the couple.

Chigvintsev's special day comes less than a week after the couple announced that they are expecting a baby boy during the season finale of Total Bellas.

Throwing a big fiesta-themed bash, a nod to her Mexican heritage, twin sister Brie Bella lead a countdown before the smiling couple fired a confetti cannon and pulled open an adorable onesie-shaped piñata, revealing a mass of blue confetti.

Clearly overjoyed by the news, as their friends cheered, Nikki and Chigvintsev shared a kiss before he lifted his pregnant fiancée into the air.

"I'm so excited that Nicole and Artem are having a boy, I knew it," Brie said about her sister in a confessional. "It's perfect for your personality, and I think you and your boy will have such a good bond."

Moments before the big reveal, Nikki confessed to her friends that while she didn't have a firm opinion, Chigvintsev hoped they were having a daughter. "He wants a girl, and I'm like, I don't care," she says.

In a confessional, the mom-to-be goes on to share that from the first moment she saw their baby, she immediately had her own hunch.

"The first time I saw the 3D version of my baby I immediately thought a boy because the back was so jacked and strong," she says. "I was like, 'Oh damn, if that's a girl she's going to come out here and destroy people — which would be awesome."

The star then also announced they were having a boy on Instagram. "Can’t wait for our little boy to arrive in August!!" she wrote.

In his own post before the episode aired, Chigvintsev wrote: "Finally today is the day we don't have to keep a secret about the gender of our baby, Nicole and I are so excited to share this with all of you!"

"Nicole I love you so so much and how much I appreciate you for going through with this pregnancy I know it could be challenging at times, you’ll make the best mom ever," he added.

Season 6 of Total Bellas will premiere in the fall. 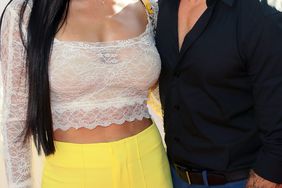 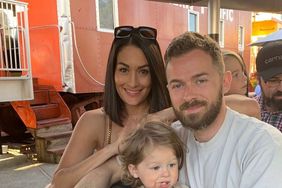 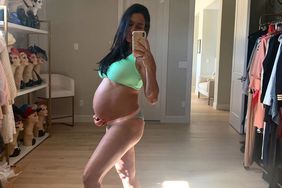