Peppa Pig is being slammed as “sexist” by London Fire Brigade who claims the cartoon discouraged young girls from becoming firefighters.

Over the weekend, the London fire department criticized the British cartoon, which centers around Peppa and her many adventures, for using language that promotes gender stereotypes.

“Come on @peppapig, we’ve not been fireman for 30 years. You have a huge influence on kids & using out of date stereotypical gender specific wording [that] prevents young girls from becoming firefighters.”

The message from London Fire Brigade was in response to clip of an episode of Peppa Pig titled “The Fire Engine.”

In the scene, Peppa’s mother can be seen dressed as a firefighter, however, she is referred to as a “fireman.”

London Fire also called out Fireman Sam — which follows Sam as he protects his town against fires — after a social media user pointed out that it does feature a female character named Penny.

“Sadly Penny’s involvement in the show is completely devalued by the constant use of the outdated term fireman in the catchy theme tune, title and on all merchandise. Language matters,” London Fire tweeted.

David Jones, the Fireman Sam‘s creator, told BBC that the show “wasn’t meant to be advertised as a recruiting post.”

“Someone doesn’t join the fire service when they watch Fireman Sam,” Jones told the outlet. “They wouldn’t be the right people for the job if that was their mentality.”

London Fire’s criticism of the children’s cartoons comes amid their #FirefightingSexism campaign.

On March 16, the rescue service shared a photo of a Barbie doll wearing a firefighter uniform.

“Great to have another supporter in our #FirefightingSexism campaign. Welcome Barbie! She’s coming to the rescue, helping girls & boys to imagine everything they can become by joining the Brigade, in our new gold kit too.”

Peppa Pig has not addressed London Fire’s criticism and a rep for the show did not immediately respond to PEOPLE’s request for comment.

The cartoon made headlines last month after parents on social media spoke out on their non-British children developing an accent after watching Peppa Pig, dubbing it #PeppaEffect.

“I just read an article about American parents saying that their children are developing a British accent because they’re watching Peppa Pig. I just have to say that it’s true. J still has her accent sometimes with certain words & I honestly love it. Lol,” one parent wrote on Twitter.

“It’s so true this #PeppaEffect,” another admitted. “I have [been] trying to teach my daughter hindi. She is 4yrs old. But she still is not able to make sentences in hindi but can speak English very well in British accent.” 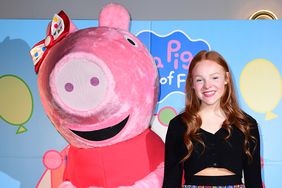 Peppa Pig Voice Actress, 18, Steps Down After 13 Years: 'I'll Never Forget My Time on the Show'