According to her family, she died of natural causes on Sunday

Pat Loud, the matriarch of one of television's first-ever reality shows — the 1973 PBS docuseries An American Family — has died. She was 94.

Her family announced the news Sunday with a statement on Facebook, disclosing that she died of natural causes.

"With inconsolable sorrow, we are sad to share the news with friends and family that on Sunday, January 10 at 1:55 p.m. PT, Pat Loud passed away peacefully in her sleep of natural causes," the statement read. "She was snuggled up safe in her comfy home, attended by loving children Michele, Delilah, Kevin and Grant."

"Pat Loud was a fierce, inflexible, forthright matriarch and loyal champion of outsiders and iconoclasts," it continued. "Her door was never locked and there was always room at her table. Never one for regrets or reflection, she moved forward in life with enthusiasm and courage. A letter from her often closed simply, 'Excelsior!'"

Pat, born in Eugene, Oregon, studied world history and English literature at Stanford University. After graduating in 1948, she returned to Eugene, where she met and fell in love with William (Bill) Carberry Loud.

Pat and Bill tied the knot in Mexico and welcomed their first son, Alanson "Lance" Russell Loud, in June 1951. They went on to have four more children together.

The family made history in 1973 when they took part in the groundbreaking PBS docuseries, An American Family, created by Craig Gilbert. The show, which is regarded as one of the first American reality series, followed the family during their everyday lives in Santa Barbara, California.

The show also chronicled Pat and Bill's eventual divorce, as well as their son Lance's coming out — making him the first openly gay TV personality. Pat moved to New York following her split from Bill but returned to Los Angeles when Lance was diagnosed with HIV. He later died in 2001 due to complications from Hepatitis C.

Pat and her family were also featured in two follow-up specials, 1983's American Family Revisited and 2003's Lance Loud! A Death in an American Family.

"Having grown up through the Depression and WW II, Bill and Pat were both unique, vibrant, creative, and independent people," the family's Sunday statement read.

The family added that in lieu of flowers, they are asking fans to make donations in her name to The Rescue Train. 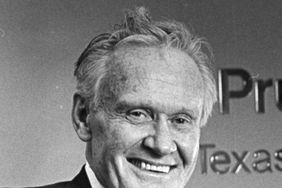 TV's Louds Six Years Later: Even Split Up, a Family Exposed Together Grows Together