Paris Hilton Accepts Sarah Silverman's Apology for 2007 Joke About Her Jail Time: 'She Was So Genuine'

At the 2007 MTV Movie Awards, Sarah Silverman made a dig at Paris Hilton who was heading to jail the following day for a probation violation

Paris Hilton is ready to "start a clean, fresh slate" with Sarah Silverman.

The comedian, 50, apologized on Thursday's episode of The Sarah Silverman podcast for the joke she made at the 2007 MTV Movie Awards where she joked about Hilton, 40, and her 45-day jail sentence the night before she would turn herself in.

Hilton released an impromptu episode of her podcast This is Paris where she accepted the apology.

"I was just shocked when I read [an article about the apology] at first and pleasantly surprised," the DJ admitted. "And then I went and listened to her podcast, and she basically made like an eight and a half minute apology to me."

"She was so genuine and so sweet and it really moved me. I was emotional hearing it," the heiress said. "And I could tell that she really did mean what she said when she was apologizing."

Hilton accepted, telling Silverman, "Thank you. I really, really appreciate you doing that. I know it's difficult for anyone to apologize, and for someone to do that really means a lot."

The comedian's apology comes days after Hilton did a podcast episode with her sister Nicky Hilton where they discussed the joke.

"What Sarah Silverman did was so disgusting and so cruel and mean," the DJ said in the episode. "To sit in the audience with her just literally publicly humiliating me, being so mean, so cruel [about my prison time], I was sitting there wanting to die."

The comedian agreed with Nicky during her apology that in today's "awakened world," she would have never made the joke "perpetuating real ugly s–"

"As I said, I was not expecting an apology. I wasn't asking for one, that was just my sister being very protective, and wanting an apology," Hilton said with a laugh in her latest podcast. "And I really just appreciate it so much, and I'm glad that her comedy has grown and she realizes that it's not nice to make fun of people. And I think everyone learns that in life."

The entrepreneur even admitted she was a "big fan" of Silverman "before that moment."

"She was so funny, but not when she's making fun of people," Hilton said.

On Silverman's podcast, she revealed that she regretted the joke immediately after seeing Hilton's reaction. The comedian also said she wrote an apology letter to Hilton, but "never heard back."

Hilton responded to that saying she got "a little teary-eyed" and "a little emotional" knowing that the comedian noticed her upset reaction.

She later added, "I would have loved to read [the letter] many years ago because that night at the MTV Awards haunted me for a very long time."

"Apologies are never late, so it's okay," Hilton concluded. "We can start a clean, fresh slate." 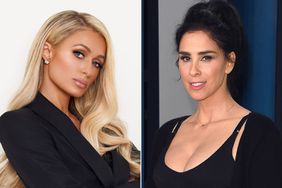