Tracy Morgan has had an incredibly transformative last few years.

While still recovering from a horrific car accident that claimed a friend’s life (and nearly his own), he’s returned to the spotlight and regained his ability to walk – including down the aisle with love Megan Wollover, who is mother to his 2½-year-old daughter Maven.

With all this behind him – and so much more ahead – Morgan, 47, is sitting down with Oprah Winfrey on the April 3 episode of OWN’s Super Soul Sunday for an intimate conversation about his recovery, his spirituality and his path forward.

Super Soul Sunday premieres March 13 at 11 a.m. and 7 p.m. ET on OWN, and those in the Los Angeles area can find out more about April 9’s Super Soul Sessions – a daylong speaker series event hosted by Winfrey that features Strayed, Eckhart Tolle and more as well as a Q&A conversation with Winfrey and Kerry Washington – at supersoul.tv/sessions. 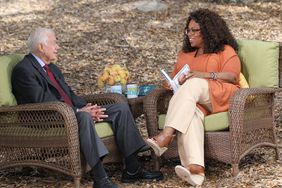