"I had a little boy named Canaan," Oprah Winfrey reportedly said during an appearance in Australia

Oprah Winfrey has revealed the name she chose for the premature baby boy she lost when she was just 14 years old.

The former talk show host opened up about her painful past when speaking at the Rod Laver Arena in Melbourne, Australia, according to news.com.au.

"I did an interview with a reporter before I came to Australia and she said you should name the baby son who died," Winfrey, 61, reportedly told the audience of 15,000.

"So I have named him; I had a little boy named Canaan," Winfrey reportedly said, not specifying the spelling. "I did have a son. And I named him Canaan because Canaan means new land, new life."

According to the outlet, Winfrey spoke movingly about the sexual abuse she suffered as a young girl, which resulted in the pregnancy.

Winfrey gave birth as a teen to her son, who died in the hospital weeks later.

News of her loss broke in 1990 when a relative of Winfrey's revealed the story.

At the time, Winfrey was shattered: "I took to my bed and cried for three days. I felt devastated. Wounded. Betrayed. How could this person do this to me?" she wrote in the February 2007 issue of O, The Oprah Magazine.

Winfrey said she worried her career would be damaged if people found out about the pregnancy: "I imagined that every person on the street was going to point their finger at me and scream, 'Pregnant at 14, you wicked girl … expelled!'"

However, once the story was out, Winfrey said she felt free.

"And I soon realized that having the secret out was liberating," she wrote in 2007. "What I learned for sure was that holding the shame was the greatest burden of all."

Oprah Winfrey: I Was 'Devastated' by Relative's Betrayal 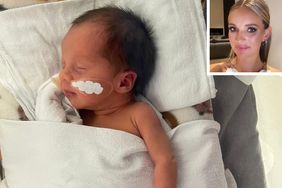