Happy Birthday, Oprah! See Her Life and Career Through the Years, in Photos

As the media mogul turns 68, look back on her early beginnings and amazing accomplishments

As a teen competing in the Miss Fire Prevention competition of Nashville, 1971

As a young news anchor in Baltimore, 1978

Hosting the show People Are Talking, 1978

Making her film debut in The Color Purple, 1985

Showcasing her weight loss on the Oprah Winfrey Show, 1988

With longtime partner Stedman Graham at the Daytime Emmy Awards, 1995

At a ribbon cutting for her Leadership Academy for Girls school in South Africa, 2007

With Barack and Michelle Obama at a New Hampshire campaign rally, 2008

With Nelson Mandela and his wife Graca Machel at Mandela's 90th birthday party, 2008

Receiving the Presidential Medal of Freedom from President Barack Obama, 2013

With costar David Oyelowo and director Ava DuVernay in the movie Selma, 2014

With best friend Gayle King at an OWN event, 2015

Accepting the Cecil B. DeMille Award during the 75th Annual Golden Globe Awards, 2018

At an event for her television network OWN, 2018 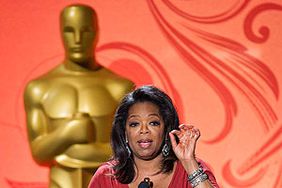