Olivia Jade Giannulli is looking back before she steps forward on Dancing with the Stars.

On Wednesday, the 21-year-old influencer was announced as a celebrity cast member on season 30 of the dance competition show, premiering Sept. 20 on ABC. Speaking with PEOPLE (the TV Show!) after the news was announced, the YouTuber acknowledges that while she's not proud of her past, she's ready to move forward — two and half years after the college admissions scandal that implicated her parents, Lori Loughlin and Mossimo Giannulli, made national headlines.

"Obviously I'm not proud of the past," Olivia tells the show, noting that she's "still young" and "believes in second chances."

"I want to keep evolving as a person, and I think sometimes it takes kind of difficult situations and mistakes and stuff that we're really not proud of to do that," she continues. "Obviously I wish I could go back in time and kind of do a lot of stuff, but I think it's kind of important to me now to just keep learning and see where the world takes me."

When asked if Loughlin, 57, and Giannulli, 58, would be in the crowd at the Los Angeles studio when she takes the stage, Olivia said she wasn't sure.

"I hope so! I don't know. I haven't asked them yet," she tells the show. "I don't even know the situation with the live audience because of COVID. They haven't told us yet."

Whether her loved ones will be cheering her on virtually or in person, the DWTS competitor said she is grateful her family is in her corner.

"They're really proud and they're super excited. Fully supportive as always," she says.

In fact, Olivia teased that Loughlin is "in total mom mode" as she prepares for the dance competition. "She's like, 'Make sure you take an Epsom salt bath,' she's trying to get me to take an ice bath. I'm like, 'I don't need an ice bath yet,' " she told PEOPLE and other reporters Wednesday of her support system ahead of the endeavor.

The DWTS news comes over a year after Loughlin and Giannulli were both sentenced to prison after pleading guilty to the charges against them stemming from the scandal.

According to the criminal complaint, the Full House actress and the fashion designer paid $500,000 to Rick Singer and Key Worldwide Foundation to falsely designate their daughters, Olivia and her older sister Isabella Rose Giannulli as recruits to the University of Southern California crew team, though neither ever participated in the sport.

Loughlin started her prison sentence in October 2020 and served nearly two months before she was released from the federal correctional facility in December. Giannulli, meanwhile, was booked into federal prison on Nov. 19 and was released from home confinement in April of this year, marking the end of his five-month sentence.

Olivia broke her silence on the scandal for the first time in December, during an appearance on Facebook Watch's Red Table Talk with hosts Jada Pinkett Smith, Willow Smith and Adrienne Banfield-Norris.

"I'm not trying to victimize myself. I don't want pity — I don't deserve pity. We messed up. I just want a second chance to be like, 'I recognize I messed up,'" the beauty influencer said at the time. "I never got to say, 'I'm really sorry that this happened,' or 'I really own that this was a big mess-up on everybody's part,' but I think everybody feels that way in my family right now."

News of Olivia's DWTS casting sparked backlash among some on social media given her family's past, with one Twitter user decrying the decision as the "textbook definition of white privilege." 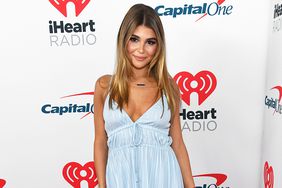