“Although I can’t change the past, I can change how I act and what I do going forward,” Olivia Jade Giannulli said

Olivia Jade Giannulli has made her return to YouTube, after not posting any videos for over a year.

The 21-year-old beauty influencer shared a vlog on Thursday, with an introduction that acknowledged her time away and her recent appearance on Facebook Watch's Red Table Talk, during which she apologized for her family's involvement in the college admissions scandal.

Olivia's parents, Lori Loughlin and Mossimo Giannulli, were both sentenced to prison last year after pleading guilty to the charges against them related to the scandal.

Loughlin, 56, was released in December from a federal correctional facility in Dublin, California, where she served two months. Mossimo, 57, is currently completing his sentence at a federal prison in Lompoc, near Santa Barbara.

In her new video, Olivia welcomed her fans and expressed her excitement at being back on YouTube, where she has garnered 1.86 million subscribers.

"I am really excited because obviously I haven't filmed in a really long time and I'm just grateful to be back on YouTube and I'm really excited for you guys to watch this video," she said. "I wanted to film this little intro part just because I didn't want to just start the vlog and me not address anything."

"Obviously, did my Red Table Talk interview and I think if you have any questions for me or you have anything to say or you're like 'Why are you back?' you can go watch that interview. I think I kind of disclosed what I thought I needed to say on there," she continued.

Olivia then inserted an "editor's note" in the video, clarifying those statements.

"I didn't want this to come across the wrong way and I'd just rather say something and make the video look a little weird," she said in the inserted clip. "I don't mean to say that in a dismissive way or a pretentious way. I think what I was trying to get across was I felt like the thing I wanted to do the most was apologize for so long and I felt like I got to do that at Red Table."

"And so although I can't change the past, I can change how I act and what I do going forward," she added. "I just didn't want anybody to take it the wrong way and seem like I'm being like, 'I went on Red Table and now my name's cleared!' Like, no that's not it. But just for my own mental sanity I don't want to keep rehashing things. I just want to move on and do better and move forward and come back and do what I love, which is YouTube."

During her appearance on Red Table Talk in December, Olivia similarly told hosts Jada Pinkett Smith, Willow Smith and Adrienne Banfield-Norris that she wanted to "move on and move forward."

"I'm not trying to victimize myself. I don't want pity — I don't deserve pity. We messed up. I just want a second chance to be like, 'I recognize I messed up,'" she added at the time. "I never got to say, 'I'm really sorry that this happened,' or 'I really own that this was a big mess-up on everybody's part,' but I think everybody feels that way in my family right now."

In her new vlog, she shared a thank you to the hosts for having her on the show.

"Also side note- thank you again Jada, Willow and Gammy for having me," she wrote. "I really appreciate you allowing me to share my experience." 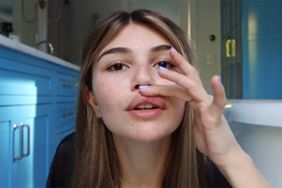