Norm Macdonald maintained a positive outlook on his life years ahead of his death. He was 61.

The Saturday Night Live alum wrote about his career's journey in his 2016 memoir, Based on a True Story: A Memoir.

"I think a lot of people feel sorry for you if you were on SNL and emerged from the show anything less than a superstar. They assume you must be bitter," he wrote. "But it is impossible to be bitter. I've been lucky. If I had to sum up my whole life, I guess those are the words I would choose, all right."

Macdonald continued, "When I was a boy, I was sure I'd never make it past Moose Creek, Ontario, Canada. But I've been all over this world. Except for Europe, Asia, Australia, Africa, and South America. Oh, and Antarctica. But that's really splitting hairs. I mean, how many people have been to Antarctica?"

Macdonald said that he "never expected to be any [thing] more than a common laborer," declaring that he would have still been "lucky to have achieved that."

"But I was blessed with so much more," he wrote. "I'm a stand-up comedian and have been for over a quarter of a century. I've performed thousands of hours, from a small club in Ottawa, Ontario, all the way to a small club in Edmonton, Alberta. Sometimes I get big laughs and think I'm the best stand-up in the whole world, and other times I bomb, and I think I'm not even in the top five."

Discussing his life before fame, Macdonald recalled having "a whole bunch of jobs" where the only thing he needed was a pair of boots. "People would look right past me, or if they did look at me, it was a mean look," he said.

"But when I got famous, people would look at me and smile and wonder where they knew me from," he shared. "If they flat-out recognized me, they'd laugh and dance like they'd won a prize, and I'd just stand there and smile and feel warmth from their love. So the fame made the world, which is a real cold place, a little less cold."

Macdonald additionally addressed the importance of "gambling" on oneself. "I lost it all a few times. But that's because I always took the long shot and it never came in. But I still have some time before I cross that river," the comedian wrote.

"And if you're at the table and you're rolling them bones, then there's no money in playing it safe," he continued. "You have to take all your chips and put them on double six and watch as every eye goes to you and then to those red dice doing their wild dance and freezing time before finding the cruel green felt."

PEOPLE confirmed Macdonald died on Tuesday. He had been privately battling cancer for nine years.

Macdonald was best known for appearing on Saturday Night Live from 1993 to 1998. During that time, he anchored the NBC sketch comedy's Weekend Update segment.

Seth Rogen, Jim Carrey, Meghan McCain and Steve Martin are among the growing list of stars who have paid tribute to Macdonald across social media. 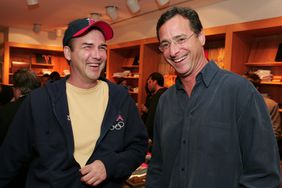