After meeting in March, Nikki Reed and Paul McDonald embarked upon a whirlwind romance – and now they’ve taken the next step.

The Breaking Dawn star, 23, and her American Idol alum beau, 26, are engaged, a source confirms to PEOPLE.

Posing together at Sunday’s MTV Movie Awards, the couple showed off a sparkler on Reed’s left ring finger as she told E!, “He’s the one.”

QUIZ: All About Season 10 of American Idol

And to those who are concerned that the pair may be moving too fast, the actress – who is reportedly house hunting with McDonald – has an answer.

“I love him and I don’t care,” Reed told PEOPLE in May.

News of the engagement was first broken by E!‘s Marc Malkin on the red carpet at the MTV Movie Awards. 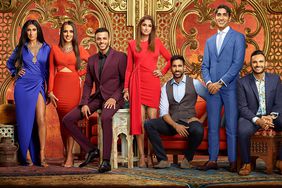