The former WWE wrestler, who has been engaged to the Russian-born Chigvintsev since November 2019, recently opened up about her updated wedding plans in an interview with Entertainment Tonight.

Though the couple initially planned to tie the knot in the fall, Bella, 38, explained that it'll likely be another year before they become husband and wife, all because of one major reason: COVID-19 travel restrictions.

"The one promise I made [Chigvintsev] before we can plan is that his parents can attend," she told ET. "And with where the world's at right now, and trying to get two Russian parents into the country, it's almost impossible. So the day I can get two visas is the day we will set our date and say, 'I do.' "

"I think last year I said Thanksgiving, right? And I want to say next Thanksgiving," she added. "I can't believe it's been a year, but I really do want to get married. I mean, selfishly, I just want to have that, like, one big day about me. I can't wait for that and to wear that dress, but I do want to marry Artem."

While their wedding may be postponed, Bella said she hasn't ruled out the possibility of welcoming baby No. 2 with Chigvintsev, 39. (The pair already share son Matteo, 16 months.)

"At the rate I'm going with never getting married, maybe," she told ET. "But this is what I told Artem: 'At 39, if I'm happy where I'm at in life, and with you and you're still in my life, I possibly will get pregnant, and let's try to have that baby before 40. But hey, if not, I'm sorry, she is closed.' "

Bella — who was previously set to marry John Cena before they called off that engagement in 2018 — met Chigvintsev when they were partnered on Dancing with the Stars in 2017 and reconnected after her breakup.

They made their relationship official in July 2019 after dating with "no labels" for nearly four months and were engaged four months later. They welcomed Matteo in July 2020.

Bella previously opened up about wedding planning on an episode of The Bellas Podcast, explaining that she and Chigvintsev would "love it to be in the fall" but chose to postpone it due to other commitments.

"A few of the venues were like, 'We're available.' And what we just started saying is, 'We're so busy every day and we completely remodeled the inside of our home," she explained. "We haven't even lived in it yet and we're doing the outside and that takes so much work. We're still not even done designing. And so he and I both were just like, 'Let's get through the house. If it happens, it happens.' "

Bella later told ET that even though they hadn't set a date, she knew exactly how she wanted her "really big bash" with Chigvintsev to turn out.

"Napa Valley, for sure," she explained of her dream nuptials. "I'd have amazing wine and just think of the decor you get to bring in ... the most beautiful reds and deep dark reds. I just have this whole vision."

Though it's mostly been smooth sailing for the couple, Bella also recently admitted that she and Chigvintsev went through a "rocky" period while they were balancing a long-distance relationship.

"What's crazy is this is the longest we haven't seen each other," she explained on an episode of The Bellas. "We went six or seven weeks [apart] because I got [a judging gig on] AGT: Extreme … Artem and I both discussed, [our son] Teo goes everywhere with mama. That's where he's comfortable, that's where he does best. And, you know, it's been hard on [Artem], and it's been hard on me too not to have my man in my bed for over six, seven weeks."

"It's been really hard on us, but we've had some sexy FaceTimes. And we're actually in a good spot. We were doing a little rocky for a bit," she continued, noting how she'd love to have Chigvintsev on the podcast to discuss how to "get back into therapy."

She explained how being raised in a different country from Chigvintsev had an "effect" on the pair's communication. But she insisted the couple is currently in a good place.

"Now we're stronger than ever," she said. 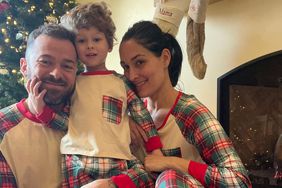 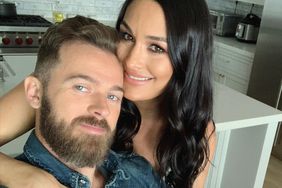 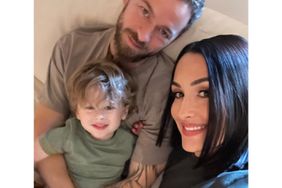