Nikki Bella is sharing some very intimate details about her relationship with Artem Chigvintsev.

On Wednesday’s episode of her podcast with twin sister Brie, The Bellas Podcast, Nikki opened up about attending Val Chmerkovskiy and Jenna Johnson’s wedding with her former Dancing with the Stars partner — but she took issue with reports that referred to Chigvintsev as her “boyfriend” at the affair.

“I posted a lot [at the wedding] with Artem. We did really cute snaps,” she said. “I was his date, right, we’re dating. But then everywhere it says, ‘Nikki Bella and boyfriend Artem’ — and I’m like, wait, boyfriend? Why are there labels? Why are they doing that?”

“I feel like for women in my situation who date and have fun, who want to get our Carrie and Samantha on and showcase it on our platforms, people automatically assume that we’re official,” she added.

Brie, “playing devil’s advocate,” said she believes that when you post with somebody you’re dating on your Instagram, that translates to “making it official.”

“I feel like there’s a double standard for women when they want to date multiple people,” Nikki argued. “We have these rules that we can’t post them on social, but like, why not? If we’re not in a relationship where it’s official, that you aren’t engaged or married or boyfriend and girlfriend, when you’re not exclusive, why can’t [we] showcase all those moments without having the labels put on them or being called names like ‘slut’? I feel like when guys do it they get high fives.”

Brie pointed out that Nikki only posts those kinds of photos with Chigvintsev.

“The way you post with Artem makes it very much [seem] like you guys are official,” she said. “You and Artem are doing cooking videos, you guys do intimate type of pictures.”

“I’ll admit, I like doing it, I have fun,” Nikki said. “One, he’s crazy photogenic, he’s very handsome, but beyond that, we have a really fun time posting. It’s fun for us.”

After Brie teased her for making it sound like she only posts photos with Chigvintsev because of his looks, Nikki followed up with a few of his other qualities.

“He’s an amazing cook, he’s an amazing lover. Oh yeah, was that TMI?” she said. “He does work around the house, so it’s really nice.”

“So he’s your boyfriend,” Brie responded. “If he has all these great qualities, then why not?”

After Brie protested, pointing out that they’re together “all the time,” Nikki responded, “That doesn’t mean anything.”

Boyfriend or not, it’s clear that the Total Bellas star and Chigvintsev are having a good time. After joking about his “insanely graceful legs” and how his sweatpants look like “skinny jeans” on her, Nikki got even more “TMI.”

“Can you imagine when I’m on top? That I’m going to save for a whole other episode,” she said. “Thighs galore, girl.”

PEOPLE confirmed in January that Nikki, 35, and Chigvintsev, 36, were casually dating.

“They’ve been spending time together for a long time, but it’s nothing serious right now,” said a source of the couple, who danced together on season 25 of DWTS in 2017. “They have a strong attraction to each other, but they’re just having fun. They’re both extremely busy with their own careers, so they spend time together when they can.”

Since then, the two have been spotted packing on the PDA, but Nikki has maintained that they’re not official. Speaking to PEOPLE at a WrestleMania 35 kickoff event earlier this month, Nikki said she’s “not fully taken,” but that she and Chigvintsev are in a good place.

Chigvintsev is the first person Nikki has been linked to since she ended her engagement to pro wrestler John Cena last summer.

In March, Cena, 42, was seen out and about in Vancouver, holding hands with a mystery woman later identified as Shay Shariatzadeh. (Shariatzadeh is a project manager for Avigilon, a Motorola Solutions tech company, and has been employed at the Vancouver-based company since 2015, according to E! News, which first identified her.)

On the April 10 episode of her podcast, Nikki admitted that when she first heard about the photos, her “stomach went into knots,” but added that she ultimately wants the best for her ex. 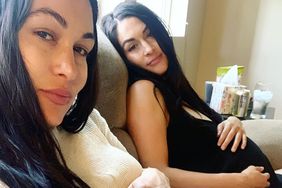