Nick Jonas and Priyanka Chopra‘s epic wedding weekend was nothing short of a fairytale — especially their first dance together as husband and wife.

Following their Mehendi ceremony, where they were both adorned with henna tattoos, and a Sangeet that night in which both families performed elaborate musical numbers with choreography and costumes, the bride and groom were married the next day on Dec. 1 in a Christian ceremony at the Umaid Bhawan Palace in Jodhpur.

Flanked by 12 bridesmaids and 12 groomsmen, Jonas, 26, and Chopra, 36, who wore a hand-beaded and embroidered Ralph Lauren gown with a 75-foot-long veil, were married by the singer’s father, Paul Kevin Jonas Sr., and exchanged rings designed by famed jewelry house Chopard. They sealed their union with a kiss that “was magical,” a guest tells PEOPLE in this week’s exclusive cover story. “It was as if time had stopped.”

After the ceremony, the couple hosted their 225 friends and family members, including Jonas’s brothers Kevin (with wife Danielle), Joe (with fiancée, actress Sophie Turner) and Frankie along with Chopra’s brother Siddharth at an elegant sit-down dinner reception with a live band. Speeches and toasts were given by all three of Jonas’ brothers as well as Chopra’s mother, Madhu, and brother (Priyanka’s father, Ashok, died of cancer in 2013).

As champagne was served, the couple cut into their seven-tiered wedding cake and took to the dance floor for their first dance to Roberta Flack’s “The First Time Ever I Saw Your Face.” Chopra and Jonas “were cheered on by all,” says a guest. “Their love was palpable.”

Planned by Sandeep Khosla and Aditya Motwane, respective founder-owners of Abu Jani Sandeep Khosla and Motwane Entertainment & Weddings , the wedding extravaganza continued the next day when Chopra and Jonas took part in a lavish Hindu wedding as well celebrating her heritage.

“I love that our wedding was a religious mash-up,” says the actress. “We took beautiful traditions that we both grew up with and personalized them in a way that made sense for us. It’s been incredible to find the commonalities between our beliefs and figuring out how to blend them in a respectful and meaningful way.” 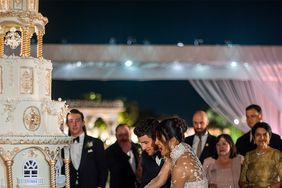 Priyanka Chopra & Nick Jonas Share Favorite Wedding Moments: 'It Was What Dreams Were Made Of' 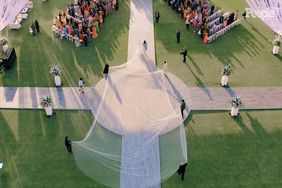 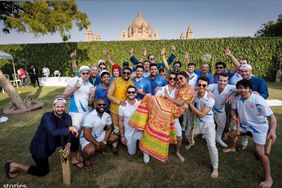 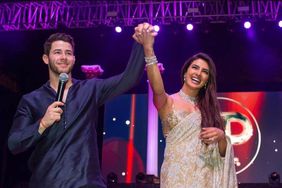