An executive producer says in How to Save a Life: The Inside Story of Grey’s Anatomy that Patrick Dempsey "knew he could stop production and scare people" on the set of the beloved medical drama

A new book is giving fans an inside look at Patrick Dempsey's 2015 exit from Grey's Anatomy.

In How to Save a Life: The Inside Story of Grey's Anatomy, author Lynette Rice spoke with cast and crew members of the beloved ABC medical drama to get the story of what went on behind the cameras — which Rice told The Hollywood Reporter was "just as dramatic" as what viewers saw on screen.

An excerpt published by THR ahead of the book's release reveals the events that led to Dempsey's Dr. Derek Shepherd ultimately being written out of the show.

According to executive producer James D. Parriott, he was brought on by creator Shonda Rhimes because of behind-the-scenes issues involving Dempsey.

"Shonda needed an OG to come in as sort of a showrunner for fourteen episodes. There were HR issues. It wasn't sexual in any way. He sort of was terrorizing the set. Some cast members had all sorts of PTSD with him," Parriott says in the excerpt.

"He had this hold on the set where he knew he could stop production and scare people," Parriott says in the book excerpt published by THR. "The network and studio came down and we had sessions with them. I think he was just done with the show. He didn't like the inconvenience of coming in every day and working. He and Shonda were at each other's throats."

A representative for Rhimes did not immediately respond to PEOPLE's request for comment.

Executive producer Jeannine Renshaw adds in the THR excerpt that Dempsey started to complain about the long hours and chaotic work schedule, which she said frustrated star Ellen Pompeo.

"There were times where Ellen was frustrated with Patrick and she would get angry that he wasn't working as much. She was very big on having things be fair. She just didn't like that Patrick would complain that 'I'm here too late' or 'I've been here too long' when she had twice as many scenes in the episode as he did," Renshaw explains in the book.

"When I brought it up to Patrick, I would say, 'Look around you. These people have been here since 6:30 a.m.' He would go, 'Oh, yeah.' He would get it. It's just that actors tend to see things from their own perspective," she says, describing Dempsey as "the kid in class who wants to go to recess."

Dempsey admits in the book to being worn down by the work schedule but says that it was difficult to let the role go.

"It's ten months, fifteen hours a day," he says in the excerpt of the workload to film the series. "You never know your schedule, so your kid asks you, 'What are you doing on Monday?' And you go, 'I don't know,' because I don't know my schedule."

"Doing that for eleven years is challenging," he says. "But you have to be grateful, because you're well-compensated, so you can't really complain because you don't really have a right. You don't have control over your schedule. So, you have to just be flexible."

"It's very heady. It [was] a lot to process, and not wanting to let that go, because you never know whether you will work again and have success again," Dempsey adds.

Grey's Anatomy: Derek Returns as the Doctors of Grey Sloan Mourn the Loss of One of Their Own

Ultimately, tensions became too high, and Rhimes told ABC that if Dempsey wasn't leaving, she would, according to Renshaw.

"Nobody wanted him to leave, because he was the show. Him and Ellen. Patrick is a sweetheart. It messes you up, this business," she says.

ABC had no comment on the events described in the excerpt when reached by PEOPLE Thursday. A rep for Dempsey did not immediately respond.

Fans will remember that Dempsey's character, Derek, dies after being hit by a truck, after he helped save another car accident victim's life.

Stacey McKee, a writer and story editor on Grey's, says in the book that there wasn't "any way to exit him without him dying."

"He and Meredith were such an incredibly bonded couple at that point," she says. "It would be completely out of character if he left his kids. There was no exit that would honor that character other than if he were to die."

"It was beautiful," he tells v, the book's author and Entertainment Weekly Editor at Large. "It was raining, which was really touching. I got in my Panamera, got in rush-hour traffic, and two hours later I was home."

While Dempsey's exit from the show shocked fans — and angered some — it wasn't his final appearance on Grey's Anatomy. In the latest season, he was one of several former stars to reunite with Meredith Grey in her dreams while she was unconscious with COVID-19.

In an April interview with Variety, Dempsey said he would consider returning to the show yet again.

"Who knows? Never say never with this show, right?" he said when asked if he could envision Derek making another cameo. "I'm glad we did it this year. And [showrunner] Krista Vernoff did a fantastic job telling the story."

How to Save a Life: The Inside Story of Grey's Anatomy comes out Tuesday. 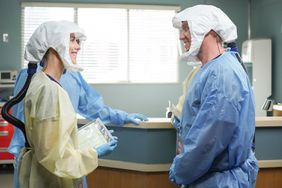 'Grey's Anatomy' : A Couple Gets Engaged While Another Ties the Knot — and 1 Pair's Future Is Unknown