In PEOPLE's exclusive first look at the trailer for season 3, fans are reminded of where things left off — before the world took a turn. Dr. Max Goodwin (Ryan Eggold) was struggling with being a single parent; Dr. Lauren Bloom (Janet Montgomery) was continuing to recover from an Adderall addiction; Dr. Iggy Frome (Tyler Labine) and his partner were preparing to adopt a baby but struggling to communicate; Dr. Floyd Reynolds (Jocko Sims) was having difficulty deciding between staying at New Amsterdam or following his fiancée to San Francisco; and Dr. Cassian Shin (Daniel Dae Kim) had just arrived to join the team.

Oh, and major sparks continued to fly between Max and Dr. Helen Sharpe (Freema Agyeman). Let's not forget that!

Well, now Dr. Vijay Kapoor (Anupam Kher) is a patient, it seems, with COVID-19. "How could this have happened so fast?" asks Helen.

"That's what I'm trying to figure out," says Max.

As the footage shows Lauren pulling down her mask with her face covered in lines and bruises from wearing a mask so much for so long, Max's voiceover says, "We're tired, we're hurting, but we've survived."

Oh, and yeah, he said that to Helen. 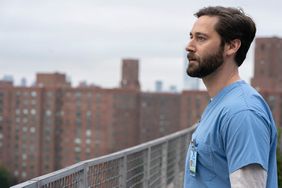 NBC's 'New Amsterdam' to End with a Shortened Fifth Season: 'So Proud of This Series' 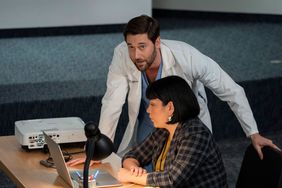 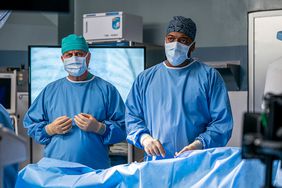