Nancy O’Dell has filed for legal separation from her husband of 11 years, Keith Zubchevich, according to court documents obtained by PEOPLE.

In the documents filed by O’Dell on Sept. 19, the Entertainment Tonight host — who separated from her husband on Sept. 3 — is citing irreconcilable differences as the reasoning for the separation. In the docs, O’Dell also requests both joint legal custody of their 9-year-old daughter, Ashby Grace Zubulevich, and for primary physical custody with reasonable child visitation rights granted to Zubchevich.

“Nancy filed for legal separation in early September. It’s very amicable and they talk every day. Their main priority is their three children,” a source confirmed to PEOPLE Thursday.

The 50-year-old ET host and business executive Zubchevich wed on June 29, 2005 in Santa Barbara, Calif. in front of 65 guests at the Bacara Resort & Spa. O’Dell’s uncle, Dr. Kirk Lawton Jr., officiated the ceremony and the couple exchanged vows they wrote themselves.

PEOPLE previously reported that the duo first spotted each other in a security line at Burbank’s Bob Hope airport 14 months before their wedding. Zubchevich has two sons from a previous marriage — Tyler and Carson —and shares Ashby Grace with O’Dell.

News of the split comes nearly a week after Access Hollywood revealed that O’Dell — who was a former host on the entertainment TV program — was one of the two women that Donald Trump and Billy Bush made lewd comments about in a leaked 2005 video published by The Washington Post.

On Monday, O’Dell addressed the video on ET: “I released a statement on Saturday and I truly mean what I said. There is no room for objectification of women, or anybody for that matter, not even in the ‘locker room.’ The conversation has got to change because everybody deserves respect no matter the gender or setting. And as a mom, well I have to add that our kids — especially our young girls — need to know that their hard work, their achievements, their intelligence, their heart, are most important. And those things will not go unnoticed.” 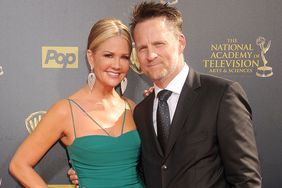