“He’s a man who’s disempowered women’s bodies for decades. It doesn’t seem to be recognized,” Rochelle, 39, tells PEOPLE. “The case is being publicized with this narrative of race. He’s being painted as the victim. I wanted to emphasize that this is about rape. I wanted to make him uncomfortable and to make people think about women’s bodies.”

Rochelle appeared on four episodes of The Cosby Show under the name Nicole Leach between 1990 and 1992. She was arrested and charged with disorderly conduct after protesting outside of the Pennsylvania courthouse where Cosby’s sexual assault retrial began on Monday.

The actress had the words “Women’s Lives Matter” as well as the names of some of the 80-year-old actor’s accusers written across her naked chest.

“People are like why is she naked? I hope this causes people to engage more,” Rochelle says. “Of course, I have no idea what Bill Cosby was thinking but I would hope that he stops for a minute and think about his own truth. At the moment, 61 women aren’t allowed to testify against him. That’s pretty appalling. The very least I could do is lend my body to this cause.”

As for whether she ever noticed anything strange or untoward on the set of The Cosby Show, Rochelle says it was always a very family friendly atmosphere.

“The protest wasn’t about me knowing him, but there’s a part of me that feels betrayed because I can understand what the victims were feeling. Like, that could have been me, I could’ve undergone the abuse as well,” she says.

Rochelle said in an earlier statement to PEOPLE, “My action today was first and foremost an action lead by the group I joined in Europe about a year-and-half ago called Femen. Femen is an international Women’s movement of topless female activists painted with slogans and our mission is protesting the patriarchy and reclaiming our bodies.”

“Protesting Bill Cosby was important for us because he is a man who has been disempowering women’s bodies for decades and in being naked today, I was symbolically taking back the ownership of all the victims’ bodies and redefining it as a political tool as opposed to a sexual object,” she said.

More than 50 women have accused Cosby of drugging and/or sexually assaulting them decades ago, but he has denied all the allegations.

The comedian stood trial in 2017 after being accused of drugging and sexually assaulting former Temple University employee Andrea Constand at his Elkins Park, Pennsylvania, mansion in January 2004. In June, a Pennsylvania judge declared a mistrial after the jury announced that they were “hopelessly deadlocked” after deliberating for days. 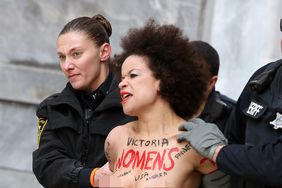 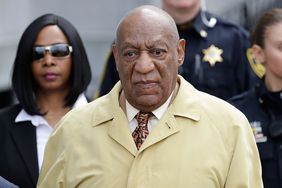 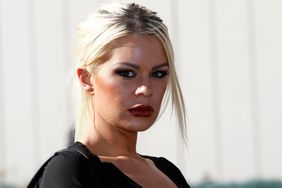 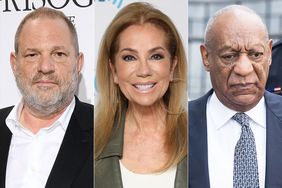 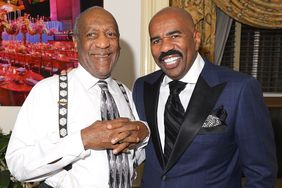 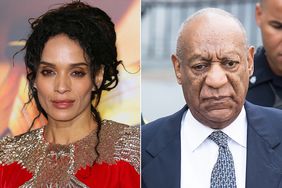