Is Murphy Brown about to deliver her last report?

Is Murphy Brown about to deliver her last report?

Twenty years after Candice Bergen’s titular investigative journalist first signed off, Murphy Brown‘s future is uncertain again. The revival of the CBS sitcom, which premiered in September, will wrap up its first season after its initial 13-episode order. According to The Hollywood Reporter, this season was always intended to run for 13 episodes.

Still, the minds behind the show point out that another season of Murphy Brown is not out of the question. Series creator Diane English tweeted, “Murphy Brown fans. We are NOT CANCELED!!!!! Several entertainment sites read a mid season schedule put out by CBS that did not have our show on it and the assumption was made that we were not renewed. Our order, at our request was 13 eps. We look forward to a second season.”

She later clarified in a follow-up tweet, “We will have to wait until spring to hear if we are renewed for another season of 13.”

The Murphy Brown revival has made headlines by tackling how its famously outspoken main character — who made waves in the ’90s as a working single mother on television — fits into Trump’s America. New episodes have featured Brown speaking up to figures in the government, fighting Trump over Twitter and wearing a sweatshirt that labels her the “Original Nasty Woman.” Her competition in her morning news time slot is her son Avery (Jake McDorman), who joined the family business as the “token liberal” on a conservative network.

Hillary Clinton made a surprise cameo in the revival’s first episode, playing a veiled version of herself who interviewed for a job as Brown’s secretary. In the scene, the women exchanged sly quips about Clinton’s qualifications — namely how familiar she is with “emails.” The contact info on her business card read: Hilary@YouCouldaHadMe.com. 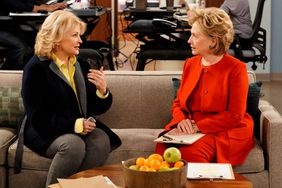 Miles Away from Miles