Miley Cyrus served as both host and musical guest

As the host of Saturday Night Live‘s season premiere, Miley Cyrus was there to make people laugh, but she also knew how to get serious when she needed to.

For her second song of the evening, “The Twinkle Song,” Cyrus sat down at a piano covered in photos of animals, small blue lights and what looked like hair, while she wore a matching Rapunzel-like ‘do, playing and singing and sometimes screaming her way through the number.

The performance ended with her in tears, her voice breaking – and then, as the audience applauded, a final discordant bang on the piano.

Her first performance of the night for “Karen Don’t Be Sad,” backed by a band in animal onesies, was less emotional but no less typical of Cyrus’ style.

The pop star, 22, stood before the microphone wearing a blond beehive made of dreadlocks, tangled with string and sparkling things.

Her body was covered, but barely, by what looked like leaves and flowers.

Cyrus opened her monologue in another outré outfit: a floral plastic minidress and matching bathing cap.

She joked: “Tonight I am on a seven second delay – not a television delay, it’s just when you smoke as much as I do you’re always on a 7-second delay.” 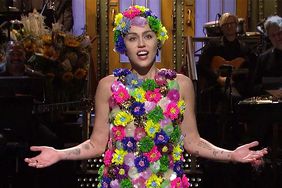