Michael Strahan is fighting for custody of his children.

The Good Morning America host, 48, has accused his ex-wife Jean Muggli Strahan of physically and emotionally abusing their 15-year-old fraternal twins Sophia and Isabella, according to court documents obtained by TMZ.

In the documents, Michael alleges that Jean, to whom he was married from 1999–2006, has been engaging in a “pattern of abusive conduct towards the children for years,” the outlet reported.

Although Michael has visitation rights, he is asking to be granted primary custody of his daughters, who reside in North Carolina with Jean, who currently has primary custody, according to the outlet.

Reps for Michael did not immediately respond to PEOPLE’s request for comment. A rep for Jean could not be reached.

Michael and Jean, who met at a salon in Manhattan when the former pro athlete played for the New York Giants, tied the knot in July 1999.

Their wedding came three years after the end of Strahan’s marriage to first wife Wanda Hutchins, with whom he shares adult children Michael Jr. and Tanita. Michael and Jean’s twins were born in 2004.

Days before Michael filed for divorce in March 2015, Jean filed a domestic violence complaint against Michael following an argument about money, according to the Associated Press.

Michael vehemently denied that he had been physically abusive at the time.

“It’s unfortunate that some marriages don’t always work out for both parties, but that’s a painful reality of the times we live in,” he said, according to the New York Post. “I would never physically or psychologically harm any of my loved ones, especially my wife. That’s simply not the man I am. I will continue to respect Jean’s privacy and not contribute to a public spectacle of an extremely private matter.”

The complaint was eventually dismissed by a judge after Jean admitted in court that her husband did not touch her during the incident, the AP reported. Michael denied all abuse allegations.

While in court, Jean alleged that Michael had been physically abusive on other occasions, including one instance in 1996 when she alleged he punched her in the face, according to the outlet.

Their divorce was finalized in July 2006. Jean was eventually awarded $15.3 million as well as $18,000 a month in child support, according to NJ.com. Following Strahan’s retirement from the NFL in 2008, his child support payment was reduced to $13,000 a month, TMZ reported.

Meet Michael Strahan’s Blended Family: ‘My Kids Give Me Strength’

He added that divorce taught him how much he’s capable of when it comes to being a father.

“When you’re a single father at that point with 4-month-old kids and you gotta be with them all the time by yourself and watching them grow and you gotta be active and I gotta do all those things, it taught me that I can do it. There’s nothing to be afraid of. I can do it. And I did it,” he said.

“My kids give me strength,” he continued. “I love being with the kids. To me it’s all about family, now more than anything.”

Michael went on to reveal that although Michael Jr. and Tanita — who remained in Germany with Hutchins following their split — were raised apart from Sophia and Isabella, all four are “very close, and I’m proud of that.” (Michael Jr. and Tanita ended up going to high school in Strahan’s hometown of Houston and both currently live in the United States.)

“It wasn’t like, ‘Okay, we split, now I’m gonna write a check and send it to your mom every month, and Daddy will see you down the road,’ ” he said. “I’m not operating like that.” 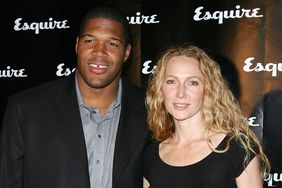 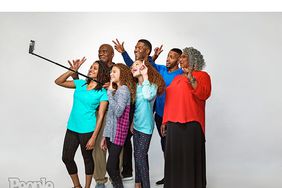 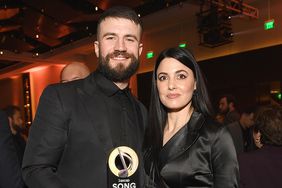