Mayim Bialik on the 'Iconic Pressure' That Comes with Guest Hosting 'Jeopardy!'

"When I was looking over some of the scripts, I was thinking, how would Alex [Trebek] say this?" the actress tells PEOPLE

Out of all the roles Mayim Bialik has taken on in her career, there's one the actress says will be the "most iconic": that of Jeopardy! guest host.

As an actress, neuroscientist, author and podcast host, Bialik is surely well-rounded enough to take her turn behind the Jeopardy! host lectern, yet the star tells PEOPLE she's "nervous about everything."

After the death of beloved host Alex Trebek last year, Jeopardy! announced several celebrities that will join the show as guest hosts for two-week stints, including Bialik, whose dates have not yet been announced.

"There's a lot of responsibility that falls on the host," says Bialik, 45. "I think also there's a lot of iconic pressure. When I was looking over some of the scripts, I was thinking, how would Alex [Trebek] say this? And that's probably not who I'm expected to be, Alex Trebek, but in my head, I am Alex Trebek — that's who I want to be."

While Bialik admits she didn't grow up watching Jeopardy! — her parents were "artistic Bohemians," she says — the actress notes that the experience is still "very exciting."

"It wasn't like, a cultural cornerstone of my parents' and my life growing up, but obviously I've watched it," she says. "I've been an answer, I think two or three times, which is crazy."

"I've been saying it's really one of the most iconic things I think that I'm ever going to do in my career," Bialik adds. "It's going to feel like Forrest Gump, like I've been inserted into the Jeopardy! set."

While the Big Bang Theory alum is looking forward to the experience, she acknowledges that there's definitely "a lot of responsibility" that comes with the gig.

"The idea is not to bring my personality to Jeopardy!, it's to provide a service as the host for those episodes to the best of my ability," she says, adding with a laugh, "and mostly to rock a blazer."

Though Bialik has her PhD in neuroscience from UCLA, she says her specific knowledge base isn't as helpful for the show as one might think.

"It's funny, because there are different kinds of smart. Jeopardy! smart is a category that I'm not really," she says. "I have a specific group of knowledge that I can handle, but I think every single time, if I was a contestant, I would forget to phrase the answer as a question."

The star says she would excel if there was a science or "biblical history" category, and jokes she will "pretend like I know all the answers" regardless.

Bialik also says one of the most "interesting and fun" aspects of filming the show has been her plethora of outfit choices.

"I need 10 outfits, so finding 10 blazers, and I think we're there," she says, adding that she hopes viewers at home will be "keeping track" of her different looks. 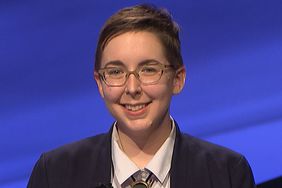