The Big Bang Theory alum is serving as an interim host for season 38 alongside Jeopardy! champ Ken Jennings

The Big Bang Theory alum and neuroscientist, 45, appeared on Tuesday night's episode of The Late Late Show and discussed her new gig as interim Jeopardy! host. She expressed that she's enjoying her time on the show, telling James Cordon that she's trying her best to do the job well — despite the hosting drama surrounding the iconic game show.

"I was a headline on CNN three days in a row!" Bialik joked. "Who knew that people were so passionate about who hosts Jeopardy!"

Mayim Bialik on the 'Iconic Pressure' That Comes with Guest Hosting Jeopardy!

Corden asked the television star what she thought of all the attention she's been getting, prompting Bialik to respond: "I mean, I'm just trying to read the clues, you know? Just let me read the clues."

She continued: "The thing about Jeopardy!, you know, we spend our whole lives wanting to be seen and this job is like... people should think the least about me as possible. Meaning, it's my job to be the host and just read the clues. But there's certainly been a lot in the news that's brought a lot of attention."

Bialik first guest-hosted Jeopardy! in the spring and was later announced as the host of Jeopardy! primetime and spinoff series.

She stepped into her current role as an interim host of the daily syndicated show last month alongside champion Ken Jennings when Jeopardy! executive producer Mike Richards left his post as the permanent host amid controversy.

Sony announced on Aug. 11 that Richards, 46, had been selected as the new permanent host of Jeopardy!, about nine months after Alex Trebek's death. Just over a week later, however, he told staffers in a memo obtained by PEOPLE that he was stepping down after disparaging comments he previously made about women and other marginalized groups resurfaced. He has since apologized.

Bialik told Corden that regardless of any off-screen drama, she's extremely happy with the opportunity.

"It's incredibly enjoyable. I learn things all day. I meet people who have a kind of knowledge that I do not possess," Bialik admitted, despite also being known for having a PhD in neuroscience. "I would do horrible on Jeopardy!. Horrible."

Mayim Bialik Reflects on Mike Richards' Exit as Jeopardy! Host: 'I Don't Wish Ill on Him'

After the death of beloved host Trebek last year, the actress told PEOPLE that out of all the roles she's taken on in her career, that of Jeopardy! guest host is her "most iconic."

"There's a lot of responsibility that falls on the host," Bialik said in March prior to her first appearance as host. "I think also there's a lot of iconic pressure. When I was looking over some of the scripts, I was thinking, how would Alex [Trebek] say this? And that's probably not who I'm expected to be, Alex Trebek, but in my head, I am Alex Trebek — that's who I want to be." 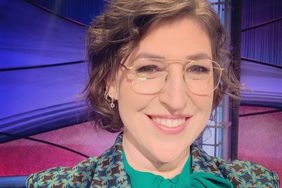 Mayim Bialik on the 'Iconic Pressure' That Comes with Guest Hosting 'Jeopardy!'