"I was never aware of my parents being anything other than my parents. They were loving and present and we played games and took train rides," Maya Hawke said of her parents Uma Thurman and Ethan Hawke

Uma Thurman and Ethan Hawke may both be Oscar-nominated actors, but their daughter Maya Hawke says she didn’t feel any pressure to follow in their famous footsteps.

“My parents are wonderful and really supportive and have given me a lot and I feel really grateful to have their support,” Stranger Things star Maya, 20, told host Jenny McCarthy on SiriusXM’s The Jenny McCarthy Show on Monday about her mother and father.

“And they both love the show and loved it before I was on it, so it’s fun,” she shared, noting the Netflix drama series.

On Thursday, Maya made her debut as Robin — a teenager who works at a sailor-themed ice cream parlor with Steve Harrington (Joe Keery), and ends up helping the Hawkins crew in their fight against evil — in the third season of the Matt Duffer and Ross Duffer co-created show.

While the Pulp Fiction actress and Training Day actor both posted loving tributes to social media in celebration of their daughter’s role, Maya told McCarthy that her parents don’t extend empty praises.

“I know my parents don’t B.S. me. They’re pretty rigorous in terms of their commentary when they like something or don’t,” she said.

Growing up, Maya said her mother and father “were loving and present” and she didn’t feel as though her family was in the spotlight.

“I think if you’re lucky, it’s like you don’t have parents who are celebrities. Like, I was never aware of my parents being anything other than my parents. They were loving and present and we played games and took train rides,” Maya said about Thurman and Ethan, who married in 1998 and divorced years later in 2005.

“I didn’t feel like I was in a public family, except for a few kind of horrifying high school moments along the way. But for the most part, I just love my family and my parents and it doesn’t matter what they do,” she shared. “And that’s kind of how they raised us.”

Maya also stated that her parents didn’t push her into acting; rather, she decided to pursue it because of her love for the craft.

“I went into acting, there was no pressure,” she shared. “It was that I love it more than anything else.”

“Some of you may know her music, some may not. But Ladies & Gentleman, get to know MAYA HAWKE. She’s the real thing,” the actor added of his eldest child with Thurman, with whom he also shares son Levon Roan Thurman-Hawke, 17.

“My victorious loving mermaid daughter,” the Kill Bill actress captioned a photo of Maya lounging on a mermaid pool float. “A weekend of triumph on Stranger Things.” 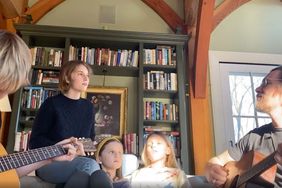