Former Today host Matt Lauer has finalized his divorce from ex-wife Annette Roque after over 20 years of marriage, multiple sources confirm to PEOPLE.

“It’s final. They are both focused on their three children,” one source close to Lauer says.

The divorce is official nearly two years after the couple separated following Lauer’s termination by NBC for alleged sexual misconduct. (He has denied the allegations).

Weeks after Lauer, 61, was fired, PEOPLE confirmed he and Roque were no longer wearing their wedding rings, though a source said Lauer was “fighting to save the marriage.”

“He doesn’t want a divorce,” the source said at the time. “Both of them, their first thought is their children.”

“The case, which is an uncontested matrimonial, was filed on July 9th in State Supreme Court in Suffolk County, New York and is awaiting judicial review of the agreement,” said Lucian Chalfen, director of public information for the New York State Unified Court System. “Upon a judge’s signature, it will be sent to the court clerk’s office to be entered. The process could take up to a few months.”

The house — a beachfront estate he bought for $36.5 million from actor Richard Gere, according to the New York Post — is a 12-bedroom, 12-bath property, known as Strongheart Manor. It features a 14,000-square-foot main house with two guesthouses and a basketball court on six acres.

As PEOPLE previously reported, Lauer could pay Roque up to $20 million in a divorce settlement, and they agreed to share custody of the children. 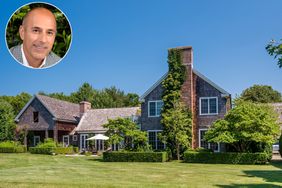