One year after being fired from NBC over alleged sexual misconduct, Matt Lauer and Annette Roque are continuing to work out the terms of their divorce

Matt Lauer’s divorce from his estranged wife Annette Roque could cost him “a lot,” a source close to him tells PEOPLE.

One year after being fired from NBC over alleged sexual misconduct, the source says Lauer and Roque are continuing to work out the terms of their divorce.

In August, it was reported that Lauer could pay Roque up to $20 million in the settlement and that they agreed to share custody of sons Jack, 17, and Thijs, 11, and daughter Romy, 14.

Although the former couple’s relationship is coming to an end, Lauer has continued to live on the property where his wife of 20 years and three children are living in the Hamptons. But once the divorce papers are signed, the source says Lauer will likely get his own place.

Matt Lauer and Annette Roque’s Strained Marriage: In Their Own Words

“Eventually the plan is that he will move out of the house,” the source says. “He’s at the compound, living in the guest house, and he sees the kids. It’s still the same setup for now. It’ll continue that way until early next year.”

Moving forward, Lauer and Roque have decided to put their difference aside for the sake of their children.

“He and Annett are co-parenting,” a second source adds. “They’re just all business. They have to talk and they even spend some time together as a family, but when they do it’s not about them it’s about the children.”

In the wake of Lauer’s firing, several insiders told PEOPLE that the anchor was allegedly often unfaithful to Roque.

“By Matt’s own admission there were struggles and challenges with his wife,” one source said. “Like many couples, they struggled with a modern marriage.”

In May, NBC released a report about the Lauer’s firing. The internal investigation, which was led by NBCUniversal general counsel Kim Harris, focused on four complainants’ allegations and resulted from nearly 70 interviews with current and former employees and more than 30 focus groups with 262 current employees. According to The New York Times, one complaint included a former NBC employee who alleged Lauer sexually assaulted her in his office in 2001.

Lauer also admitted to — and apologized for — seeing NBC staffers romantically during his tenure at the network. 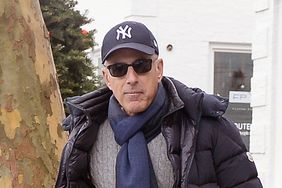