"I can't speak for anybody but myself, but I think the women appreciated it," said the former football player

A lot transpired during Matt James' season of The Bachelor — but when it came to the Fantasy Suite dates, he kept things PG.

By the time the former football player reached that stage of his journey to find love, he was down to three contestants: frontrunner Rachael Kirkconnell, newly-minted Bachelorette Michelle Young and second runner-up Bri Springs. Instead of getting physical, James says he used his private, off-camera time with the ladies to engage in deeper discussions.

"I can't speak for anybody but myself, but I think the women appreciated it," James, 29, told WSJ. Magazine in a profile published on Wednesday. "Because I did learn things about them that I hadn't gathered — that I don't think I would have learned if I hadn't used that time to really dive deeper into something that they might not have been comfortable talking about on camera."

For James, what was "most important" to him was that the women understood his own personal journey in life, so that they could "make an informed decision for themselves."

"If they wanted to be with someone like me, who had this quote-unquote baggage, because that's what I saw it as initially," he said. "It wasn't until I became more comfortable with who I was as a man, as a Black man, as a brother and a son, that it just became more of my story."

But many of those intimate discussions never made it to air. "Ultimately, The Bachelor's about more than myself," James said. "It's about all the women who were there and their journeys. There's a lot of things that didn't make air that you've just got to hope that [the producers] knew a lot better than I do — because they've been doing this, some of them, longer than I've been alive."

James was the ABC franchise's first-ever Black male lead. His season, which premiered in January, was embroiled in controversy after racially insensitive photos of Kirkconnell, 24, surfaced online, including images of her attending an Antebellum plantation-themed formal in 2018. She later apologized via Instagram in February, noting that her "ignorance was racist" and that she was "wrong."

Chris Harrison, the longtime host of the franchise, drew backlash when he spoke out in Kirkconnell's defense in an interview with former Bachelorette Rachel Lindsay on Extra. He ultimately apologized and announced that he would be stepping away from the franchise for a period of time. Former Bachelorettes Tayshia Adams and Kaitlyn Bristowe will take over hosting duties for Katie Thurston's season, set to premiere in June.

James and Kirkconnell initially revealed during The Bachelor's After the Final Rose special that they had parted ways due to the controversy. But last month, the pair sparked reconciliation rumors when they were spotted in New York City together.

James recently told PEOPLE exclusively that he's trying to make it work with Kirkconnell. "I've seen Rachael a handful of times," he said last week. "I'm not pursuing any relationships right now outside of that. I said I was going to focus on my relationship with her and that means focusing on it."

He also touched on his relationship with Kirkonnell in the WSJ. Magazine interview, saying he's had "critical conversations" with her about "being in this relationship and what I need in a partner — especially if that woman isn't Black — to understand what comes with me and my life and being Black." 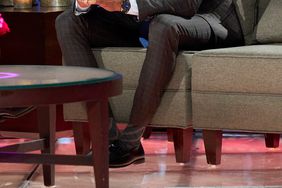 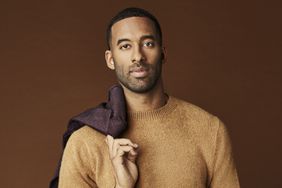