Filming for season 4 of The Marvelous Mrs. Maisel is underway, and you've got to see the photos from set

Filming for The Marvelous Mrs. Maisel season 4 is underway, which means that we have been getting glimpses at what this next chapter has in store for Midge (Rachel Brosnahan), Susie (Alex Borstein) and the rest of the cast.

Brosnahan celebrated the return with a photo on Instagram, showing off her costume under a clear umbrella (seemingly for COVID safety). In January 2021 she wrote, "It looks a little different this year...but we're back! Working away on @maiseltv Season 4."

And Back in Black

On March 4, Brosnahan showed off that signature Midge style in a black ensemble, bold black hat and bright pink gloves.

"Sunday In The Park With Covid," the show's leading lady captioned a photo sitting apart from the cast and crew.

On April 29, the cast was spotted filming in N.Y.C.'s Washington Square Park, with Brosnahan wearing a pink jumpsuit, leather jacket and curlers in her hair. We know she is probably meant to look disheveled ... but it's a look!

And that day, Borstein, also in leather, did a bit of running around.

In between takes, Brosnahan chatted with the show's creator, Amy Sherman-Palladino, near a candy cart.

Arguably the best photos from set are those of Brosnahan stopping to pet puppies while filming.

No, really, the actress loves to stop and pet dogs. Come on! Can we blame her?! We'd have to do the same.

If you're not stopping everything to give a dog a quick scratch, what are you doing?

Even when she's not in costume, Brosnahan still looks chic with her umbrella on her way to set.

On April 23, the actress filmed a scene where she's removed from a club. Looks like there are some more classic Midge Maisel antics in season 4.

It also looks like she'll still find a way to have the last word! In the same scene, Brosnahan was seen with Borstein, making sure she gets to say her piece.

Brosnahan and Borstein joked around on set while filming on April 26.

On May 4, Brosnahan wore a pink ensemble while filming in a vintage cab.

Zegen and Brosnahan posed for a photo while filming together at Coney Island. Does this mean there's hope for the two in season 4?

Zegen popped into a vintage payphone booth while filming at Coney Island on May 7.

Brosnahan looked chic in a blue-and-yellow ensemble while filming at Coney Island on May 7.

Looks like there's trouble ahead for Midge if this shot from May 11 is any indication!

Brosnahan wore a bright red ensemble while filming a scene with Luke Kirby, who plays Lenny Bruce, on May 10.

Kirby clearly thought this look was a knockout. (Or maybe he was just acting out the scene ... but either way, he was floored!)

Brosnahan and Borstein shared a laugh on set on May 11.

Brosnahan sported a black dress, a mask and black Converse with 'Marvelous' embroidered on them on May 12.

On May 13, Brosnahan and Kirby acted out a scene in front of a vintage cab.

Kirby caught the cameras while filming solo on May 13.

Brosnahan and Zegen also filmed together May 13.

Brosnahan sported a bright turquoise coat, a pale pink dress and a huge smile on set on May 17.

Midge shared a moment with the milk man on May 17.

The actress walked through the Upper West Side of N.Y.C. on May 17.

Brosnahan wore a floral dress ensemble on set on May 13.

Brosnahan sported a blazer and crop top on her way to set on May 18.

Back under her umbrella, Brosnahan headed to set on May 19.

Brosnahan films a scene in a plaid ensemble on May 26.

Marin Hinkel, who plays Brosnahan's mother in the series, filmed a scene outside of Cherry Lane Theatre with her on-screen daughter in N.Y.C. on May 27.

Tony Shalhoub, who plays Brosnahan's father in the series, carries some coats and accessories while filming on May 27.

Brosnahan sported a pink floral ensemble with a matching hat while filming on June 1.

Did we mention that Brosnahan loves to stop and take puppy breaks?

Michael Zegen and Rachel Brosnahan posed for a photo while filming on June 4.

Ever wonder how actors manage to stay cool in the summer heat even though they're bundled up? Allow this photo of Brosnahan to speak for itself!

New costar alert! Milo Ventimiglia has joined the cast for season 4! On June 10, the actor was photographed filming with Brosnahan.

While we don't know the exact details of Ventimiglia's character, it certainly looks like things are about to get little romantic! In one photo, the actor handed Brosnahan a bouquet of flowers.

In another, the This Is Us actor brushed a piece of hair away from Brosnahan's face.

The pair shared a laugh between takes on June 10.

Okay, let's pause talking about Milo Ventimiglia's mysterious new character and talk about the fact that they are using a stuffed corgi as a stand-in. Give that stuffed Corgi an Emmy!

Brosnahan looked ready for action as she emerged from her trailer in a stunning red ensemble on June 10.

Brosnahan gave her onscreen son, played by Nunzio Pascale, a hug between takes on June 10. 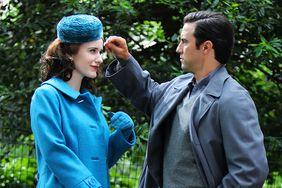 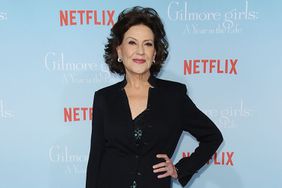 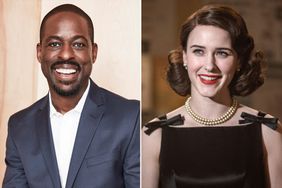 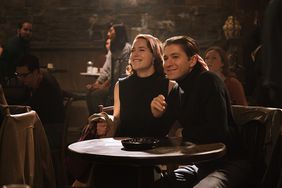