Mark Wahlberg on His Marky Mark Past: 'I Was an Absolute Train Wreck'

Mark Wahlberg doesn’t have such good vibrations about his past as rapper Marky Mark.

“They give Justin Bieber a hard time,” Wahlberg said during an awkwardly funny appearance on The Tonight Show with Jay Leno Tuesday night. “I was an absolute train wreck. Wow.”

The Lone Survivor actor, 42, made his first appearance on The Tonight Show 21 years ago as rapper Marky Mark, and the funny host couldn’t help but pull out clips of Wahlberg rapping with the Funky Bunch and tossing around some old-school attitude.

“I started wearin’ the longer shorts because … the regular brief underwear … get sweaty and tend to get stretched out,” Wahlberg explained in the decades-old clip about what happens when he raps and pulls down his pants. “You don’t want nothin’ fallin’ out the side.”

“Is that a big problem?” Leno asked, laughing after the clip had ended. “Fallin’ out the side?” 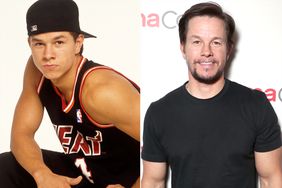