"Mark's mom had a hard time even grasping the reality of his dark past, so accepting his death — she's a mess," a source tells PEOPLE

Since Mark Salling was found dead in an apparent suicide at age 35 on Tuesday, his parents, John and Condy, are mourning the loss of their son — and finding his death difficult to accept.

“His family is devastated,” a source tells PEOPLE. “His parents are doing as well as anyone in this situation can do. They’re from Texas and are very church-driven.”

“Mark’s mom had a hard time even grasping the reality of his dark past, so accepting his death — she’s a mess,” the source adds.

Salling’s death came just a month before he was to be sentenced to prison for possession of child pornography. He was arrested in December 2015 after LAPD’s Internet Crimes Against Children unit obtained a search warrant for his home in Sunland, California. Federal investigators say they found more than 25,000 images and 600 videos depicting child pornography on computers and thumb drives that belonged to Salling. The content depicted children as young as 3 years old being abused, according to court documents.

He pleaded guilty to possession of child pornography involving a prepubescent minor in October. After striking a plea deal in December, he was due to be sentenced in March and expected to serve four to seven years in prison.

Coroner Assistant Chief Ed Winter told PEOPLE that Salling was found hanging from a tree in the area of the Los Angeles River in Sunland. He was pronounced dead at 9 a.m. on Tuesday.

Salling’s attorney Michael Proctor confirmed the news of the troubled actor’s death in a statement to PEOPLE.

“I can confirm that Mark Salling passed away early this morning,” said Proctor. “Mark was a gentle and loving person, a person of great creativity, who was doing his best to atone for some serious mistakes and errors of judgment. He is survived by his mother and father, and his brother. The Salling family appreciates the support they have been receiving and asks for their privacy to be respected.”

Raised in Dallas, Salling moved to California to attend music school in Pasadena after high school, but didn’t land his breakthrough role in Glee until he was 25.

“He grew up in a really loving and supportive home with incredible parents,” a Salling family source told PEOPLE about his “humble” childhood. “He had a great relationship with them but was also particularly close with his grandmother, whom he loved dearly. They wanted the best for him and wanted to make sure he was pursuing his dreams and being responsible.”

“His loved ones — actual loved ones — were absolutely shocked,” the insider said. “In the last few years, we had very little contact. When you’re living against your own morals or what you know to be right, you tend to avoid people who will hold up mirrors.”

Looking back at the last few years of Salling’s life, “it’s clear he was dealing with demons himself,” said the family source. “The problem doesn’t live in the existence of demons or pain or sexual appetites that began to skew as time went on. The inherent problem is that he did not seek help or have someone close enough to him willing to call it out.” 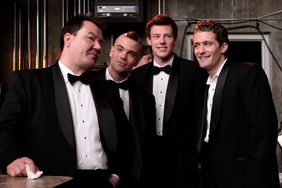