Say It Ain't So! Mark-Paul Gosselaar Reveals Zack Morris Was a Bottle Blond and Other 'Saved By the Bell' Secrets

Mark-Paul Gosselaar, who starred as the teen dreamboat in the hit early ’90s show Saved By the Bell, recently spilled several secrets from his days as the heartthrob of Bayside High during an appearance on The Tonight Show on Tuesday.

“My mother is from Indonesia. My mother is this tiny little Indonesian woman!” Gosselaar told host Jimmy Fallon. “People don’t know this: Zack Morris is half-Asian. That’s why the hair, the blond hair, was dyed for all those years.”

So it was all a lie?

Indeed: “People think, ‘Oh, that’s your natural hair color’ – it was not. That was color by Clairol,” Gosselaar continued, as Fallon held up a picture of the actor sporting bleached blond locks as Morris. “That is not natural, guys, you can see the brown going through!”

Gosselaar, now 41, also revealed several other secrets about the show, including the fact that they all thought it would get nixed.

“You know, our show, every year we thought we’d be canceled,” the actor said. “Every single season of Saved by the Bell, it was ‘canceled.’ At the end of season, we all left, we said goodbye to each other. And that’s why every season my hairstyle was so radically different! Cause I was just going to school, and I had the Vanilla Ice thing, cause Vanilla Ice was big in 1990, so I had the shaved sides and, like, the big bouffant.”

The actor also said his inspiration for some of the classic Zack Morris tricks (like pausing the action and turning to address the camera) came from none other than Ferris Bueller (a.k.a. Matthew Broderick) in the iconic film Ferris Bueller’s Day Off.

“I did whatever Ferris Bueller did or whatever was cool around that era,” Gosselaar said. “Remember when Zack Morris talked to the camera? People think like, ‘Oh, that was such a novel idea that you came up with’ – like, no, that was done by Ferris Bueller, we were just copying him! That was the muse for my character. I was such a fan of Ferris Bueller. That’s what Zack was.”

While sadly his days as Zack are long gone, Gosselaar is starring in NBC’s upcoming comedy Truth Be Told alongside Vanessa Lachey. The new series premieres Oct. 16 at 8:30 p.m. ET on NBC. 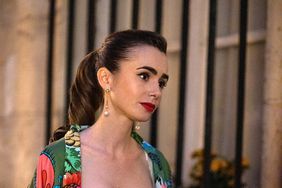