"I love my co-hosts and the crew," says the actress, who wants to be more involved with her next project

Marissa Jaret Winokur is signing off.

“I will not be returning to The Talk this year,” the actress tells PEOPLE.

Winokur joined the CBS daytime chat fest in September to do “Mom in the Street” segments twice a week. “But as the show evolved,” she says, “there really wasn’t room for my segments.”

Though Winokur says, “I love my co-hosts and the crew at The Talk,” she wants “to be more involved with what I’m working on,” which includes developing her own cable show and plans to launch a clothing line later this year.

For now, Winokur, who hasn’t appeared on the show yet this year, is still coping with the sudden death of her father, Michael Winokur, over the holidays, an unhappy event that has reminded her of what is most important – her family and working on projects that can make a difference.

“I’m still grieving over the loss of my father. I honestly think this is a blessing in disguise that I don’t have the added stress of pretending to keep my chin up and go to work every day,” says Winokur, who’s trying to remain upbeat for her son, Zev, 2. “I loved my father so much. He was my inspiration. He was my number one. He was the one who told me I could be anything I wanted to be when I was growing up. He’s why I am who I am.”

In an exclusive statement, Brad Bessey, executive producer of The Talk tells PEOPLE, “We think the world of Marissa as a creative talent, on-air personality and super mom. This is a mutual decision based on time, not talent.”

Bessy continues, “The show is trending toward more time with panel conversations and interviews, creating fewer opportunities for the mom-on-the-street segments. We are grateful beyond words to Marissa for her hard work, unrivaled energy and enthusiasm; and the integral role she played in the successful launch of The Talk. We wish her the very best.” 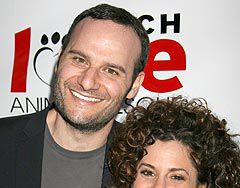 Marissa Jaret Winokur's Blog: Why I'm Trying for Another Baby