The Bachelorette and Bachelor in Paradise alum tied the knot with his fiancée, Ally Lutar on Saturday evening in Vancouver, Canada, PEOPLE can exclusively reveal. In a sneak peek video — captured by Beautiful Life Studios — of their gorgeous nuptials, the newlyweds are all smiles as they walk hand-in-hand together down a candlelit hallway.

For their big day, Grodd wore a suit and bow tie, and Lutar donned a plunging and fitted lace gown, designed by Ines Di Santo.

Grodd, 29, met Lutar, who owns a marketing and staffing agency, Propelle+Konnect, through mutual friends at a barbecue in Newport Beach, California, in July 2016.

“The minute I met her I knew this was how you feel when you meet your wife for the first time,” he previously told PEOPLE. “Ally is gorgeous and strong — I was completely drawn to her confidence.”

“She’s also an incredibly successful business owner, and her business has allowed her the ability to travel — luckily we met because of one of those work trips,” said Grodd. “Our first date was the following day at Javier’s in Newport Beach.”

That first night, Grodd shared, “felt as if we had always been together.”

He continued, “Immediately we both knew we had found the missing piece in our lives. Ally moved in the very next day! I can truly say I knew I loved her the day I met her. We have moved so quickly because it’s always felt so right and meant to be.”

In May of last year, Grodd popped the question to the British Columbia native — with a halo-set diamond ring with a 3-carat round center stone — at the picturesque Lynn Valley Canyon in Vancouver.

Grodd took Lutar, 35, on a mountainside hike and popped the question down on one knee on a suspension bridge over a waterfall. Lutar’s parents and brother were waiting for the couple with bottles of champagne at the bottom of the river.

“I was trying to find the perfect location to propose,” Grodd said. “I wanted her to be completely surprised.”

“It was truly the most incredible day of our lives,” he added.

Grodd previously made it to the final four on Andi Dorfman‘s season of The Bachelorette in 2014. He then starred in the inaugural season of Bachelor in Paradise that summer and wed fellow contestant Lacy Faddoul on an episode of BiP a year later. The marriage was not legally binding, and by summer 2016, the two had called it quits. 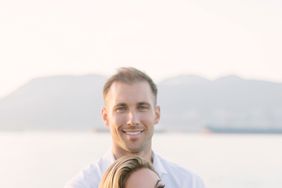 'Bachelor in Paradise ' Alum Marcus Grodd Is Engaged! See the Stunning Photos — and the Ring