Ball, who started her career as a model, poses for a photo in the early 1940s.

Another glamour shot from the '40s.

Having a moment with husband Desi Arnaz at New York City's Carlyle Hotel in February 1954.

With Arnaz and their daughter Lucie on board their boat, the Desilu, in 1954.

Ball and Arnaz pose next to the gates of their Desilu Studios in L.A. in August 1958.

Ball, Arnaz and their children Desi Jr. and Lucie arriving in London in June 1959. Ball and Arnaz would divorce the next year.

Ball and her second husband, Gary Morton, in an undated photo from the American Cinema Awards.

Ball seven years before her death, at the taping of a Bob Hope special in Burbank, California, in February 1982. 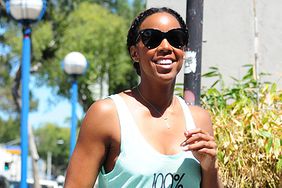