Erica Mena, who is pregnant with her second child, shares 15-month-old daughter Safire with Safaree Samuels

Erica Mena and Safaree Samuels are calling it quits after a year and a half of marriage.

The Love & Hip Hop stars secretly got married in October 2019, and share a 15-month-old daughter together, Safire. Mena is also pregnant with their second child together, an announcement she and Samuels made just earlier this month.

According to court documents obtained by Page Six, Mena says her marriage to Samuel is "irretrievably broken" with "no hope of reconciliation."

She is asking for joint legal custody and final decision-making authority, Entertainment Tonight reports, and requests physical custody of Safire on a temporary and permanent basis "with the parties having parenting time as determined in the minor children's best interests."

In addition, Mena asks Samuels to pay her legal fees, child support, and for sole use of their home in Georgia, TMZ reports.

On May 3, Mena and Samuels announced they were expecting their second child together.

"Get ready!!!! Any day now ❤️," Mena wrote in a comment on the post, PEOPLE previously reported.

On Tuesday, Mena shared a photo of herself wearing a bodycon jumpsuit as she cradled her baby bump, writing in the caption, "When I was seven months 🥰🧿"

A tweet of Tory Lanez's on her Instagram Stories Mena shared on Monday read, "I'd rather loyalty than love. And no the two are not the same." 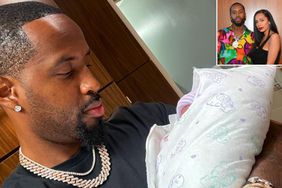 Safaree Samuels Welcomes Baby No. 2 with Estranged Wife Erica Mena amid Divorce: 'Another Me'