The couple are hoping to take a five-day trip to San Jose Del Cabo this June, according to court documents obtained by PEOPLE

Lori Loughlin and Mossimo Giannulli are asking a judge to grant them travel permission to Mexico after having both completed their prison sentences for their roles in the college admissions scandal.

According to court documents filed on Monday and obtained by PEOPLE on Friday, the couple are requesting to take a five-day trip to San Jose Del Cabo this June "to spend time with [their] family."

Loughlin, 56, has already paid her $150,000 fine and completed her community service requirement, to which she was sentenced to 150 hours, according to a travel request filed on her behalf.

Meanwhile, Giannulli, 57, has satisfied his fine of $250,000 and "is actively working on completing his community service requirement," a filing on his behalf reads.

According to the criminal complaint against them, the couple paid $500,000 to Rick Singer and Key Worldwide Foundation to falsely designate their daughters, Olivia Jade Giannulli, 21, and Isabella Rose Giannulli, 22, as recruits to the University of Southern California crew team, even though neither ever participated in the sport.

Loughlin started her prison sentence in October, and served nearly two months before she was released from the federal correctional facility in Dublin, California, in December.

Giannulli was booked into federal prison on Nov. 19 and was released from home confinement last month, marking the end of his five-month sentence.

A source recently told PEOPLE that the couple, who have been married since 1997, were "beyond relieved" after having served their respective prison sentences.

"Mossimo is, of course, happy to be done with the home confinement," the source said. "They are both beyond relieved to have completed their prison sentences. Mossimo has to finish his community service, but then he can really move on."

The insider added, "Lori is a wonderful wife, mother and friend. She and Mossimo made huge mistakes. They have taken responsibility for them and just want to start fresh now."

A rep for the couple did not comment on their most recent court request when contacted by PEOPLE. 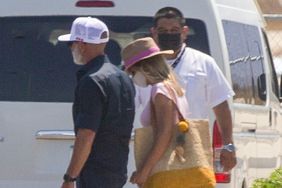