Little Women: LA is back for an eighth season, and it’s full of new faces and unexpected life changes.

In PEOPLE’s exclusive super-tease for season 8, premiering April 4 on Lifetime, four newcomers join the cast — and they all seem determined to make an impact.

Mykesha Smith, 26, and Jordan Domingo, 19, are both dancers and ready to shake things up. They’re joined by sassy model Dominique (Dru) Presta, 23, who interns in fashion for people with disabilities.

These stage lovers must share the limelight with Cole Seward, 25, who goes by the stage name Raquel, and is the only little person drag queen in America.

RELATED VIDEO: Terra Jolé Gets Emotional About Her Daughter Penny

Don’t expect the little women we know so well from past seasons to fade into the background, though: they’re all stepping out of their comfort zones and re-inventing themselves in their own ways.

Christy Gibel looks like a new woman: She’s lost 35 lbs., and with her newfound confidence she’s fully embracing her body and a dream she’s harbored for years.

Elena Gant and Tonya Banks are both taking their careers in new directions: Elena’s launching a make-up line and writing a children’s book, while Tonya’s going back to her acting roots.

As for Terra Jolé, she’s showing it’s never too late to make a difference in the world: she’s giving back to the LP community that helped her by working with younger LPs in L.A. and launching her own retreat.

But her family must navigate uncharted territory in the wake of first-born daughter Penny’s multiple brain surgeries. 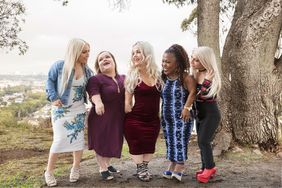