In an exclusive sneak peek at the new episode of Little People, Big World, Amy Roloff decides to get a shoulder tattoo

Amy Roloff is ready for a “new chapter.”

In an exclusive sneak peek at Tuesday’s episode of Little People, Big World, the 51-year-old reality star reveals that she’s going to get a bit of work done and she’s very excited about it.

“I think I’m going to get a tattoo,” she tells her daughter-in-law, Audrey, in the clip.

When Audrey asks if who knows about this plan, Amy tells her “no one really.”

“With the divorce and everything, it’s a wonderful opportunity to do these things that I’v always wanted to do and maybe it’s a crazy idea, but I thought about getting a tattoo for a number of years,” she says in a interview. “It just seems outside my box a little bit.”

Amy goes on to tell Audrey that getting a permanent tattoo wasn’t a rash decision, it’s something that she has been thinking about for three years.

“It just keeps popping up,” she says while sketching out her ink idea for Audrey.

“I think she’s embracing the more that is to come in her life,” Audrey says in an interview. “Even though some chapters ending, there is exciting new chapters that she’s going to be able to start.”

Matt and Amy’s divorce was filed in 2015 and finalized in May 2016, and the pair continue to operate their farm together.

“It’s a new chapter,” Amy says. “I’ve raised the kids, I’m an empty-nester, there’s just so many changes are happening all at once and the tattoo is a permanent change … this is the perfect time.” 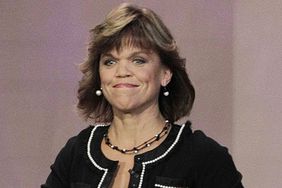