Lifetime’s Christmas move line-up is sure to make you nostalgic.

On Monday, the network announced that it’ll be uniting the cast members of One Tree Hill, Sabrina The Teenage Witch, Sister, Sister and The Cosby Show.

As a part of the “It’s A Wonderful Lifetime” programming, Lifetime will present 28 original movies this holiday season, breaking last year’s record of 23.

Christmas Reservations will star Melissa Joan Hart, who played Sabrina in Sabrina The Teenage Witch, and Ricardo Chavira from Desperate Housewives. Hart plays Holly, the event coordinator at Treeline Ski Resort. As she works, her widowed college sweetheart, played by Chavira, arrives with his two kids.

The movie will also feature Ted McGinley from Married… with Children, Michael Gross from Family Ties and Markie Post from Night Court.

A Very Vintage Christmas will follow antique shop owner Dodie (Tia Mowry-Hardrict) after she finds a hidden box with mementos about a timeless romantic union. Dodie works to deliver the box to its original owner and convinces a new tenant (Jesse Hutch) to help her search.

Along with Sister, Sister’s Mowry-Harrict, the show will also star Patricia Richardson, who played Jill Taylor on Home Improvement.

A Christmas Wish will include one small One Tree Hill reunion! Hilarie Burton and Tyler Hilton will be linking up on this film — as will Hilton’s wife Megan Park from The Secret Life of an American Teenager.

The movie follows Maddie (Park) as she makes a Christmas wish for her sister Faith (Burton) to find true love. Faith and Maddie then meet Andrew (telenovela star Cristian De La Fuente), who seems like a good fit for Maddie.

As Christmas Day approaches, Faith wonders if Andrew is the right fit for her sister, before introducing her to Wyatt (played by Hilton).

Also starring Michael Xavier and Miami Vice’s Belinda Montgomery, the movie will follow the DJ Kara Porter (Pulliam) as she broadcasts her Philly-based radio show from the small town of Bethlehem.

As she works to increase numbers and get a promotion outside of her current station — which plays holiday music year-round — she uncovers the identity of the small town’s Secret Santa, who anonymously pays for the town’s Christmas festivities. In that journey, she discovers the meaning of family, community, love and Christmas.

The Practice’s Marla Sokoloff, Rob Mayes from John Dies at the End and Marie Osmond link up for The Road Home For Christmas. The movie follows two rival musicians Lindsay (Sokoloff) and Wes (Mayes) during a roadtrip to their neighboring hometowns.

Without a gig for Christmas Eve, the pair go on the drive, where they find themselves saving a nativity party, surviving a snowstorm, and performing onstage in Nashville with a celebrity singer (played by Osmond).

Starring Dr. Dolittle franchise’s Kyla Pratt, Christmas in Vermont (working title) follows Emma (Pratt) as she finds her college boyfriend Fletcher’s initials at a vintage jewelry shop. Her sister (Rachel McLaren) then sends her off to the same bed and breakfast where Fletcher (Ed Ruttle) is staying.

The two then bump into each other and plan a show on Christmas Eve as they try to save the local theater.

Pratt also played Breanna on One on One and Penny on Disney Channel’s The Proud Family.

“It’s A Wonderful Lifetime” officially kicks off Oct. 25 and runs through Dec. 25 on Lifetime. 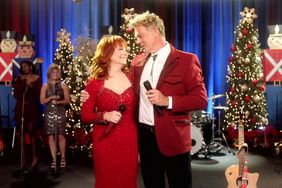 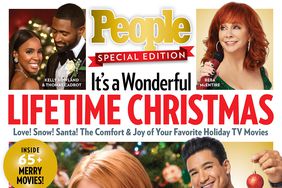 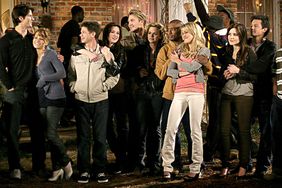