In Let’s Get Physical — Pop’s new modern-day comedy series that pays homage to the 1980s — a family is forced to get themselves back into shape — physically and financially — to run the family aerobics business.

After the unexpected death of his father, the “Godfather of Aerobics,” Joe Force — played by Breaking Bad’s Matt Jones — finds himself reluctantly returning to the family business, after spending the past two decades as the lead singer of an ’80s cover band.

Although he was once destined to follow in his father’s footsteps, after spraining his ankle in the Competitive Aerobics Championships in high school, Joe lost his athleticism, flexibility, drive, and even his girlfriend — who ended up marrying his rival, the owner of an elitist chain of gyms called “The Metrix.”

Luckily, Force isn’t the only one responsible for keeping the family business afloat. His mother Janet — played by Jane Seymour — is along for the ride too.

But before they can hit the ground running, the mother-son duo run into one big problem: money.

In PEOPLE’s exclusive first look at the new series, Joe and Janet meet with a financial analyst who doesn’t have good news for them about getting a business loan.

“I don’t even know where to start,” she tells Joe. “There are small children with more credit history than you. Have you ever had a checking account, a salary of any kind — a phone bill?”

Without any hint of embarrassment, Joe told her that he was a performer who lived off of tips and bought his “cell phones at gas stations because they have great deals and sandwiches.”

And then Joe found out that his mother’s finances were in even worse shape — and that she tried to start a lingerie line in the ’90s for military wives called “Classified Secrets.” 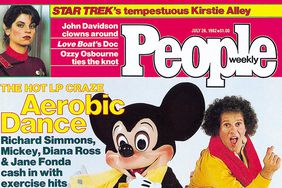 A Social-Climbing Stockbroker, Clyde Pitchford, Gets Pinched for Fleecing the Elite of Richmond

The Perks May Be Great, but Fame Isn't So Simple for the Fractious Jackson Clan