Lena Dunham is gushing about her new boyfriend in a very public way.

In a sweet tweet on Monday, the Girls alum spoke out about her new beau, sharing the ways in which he helps her when she's not feeling well.

"When I feel sick, my boyfriend makes delicious pasta & rewatches as much BoJack [Horseman] as I want, walks the dog & makes up songs about her face," the Dunham, 35, wrote.

Back in January 2020, Dunham revealed she was "totally single" after breaking off an engagement to another unnamed partner.

"In January, all I tweeted about was how men are basically refried beans in human form," the writer-producer went on to say in her tweet, Monday. "What I'm saying is, don't quit before the miracle, kids."

Dunham's last public relationship with music producer/songwriter Jack Antonoff. PEOPLE confirmed in January 2018 that the pair split after more than five years together.

In August 2019, Dunham shared in an essay for Domino magazine that she and Antonoff were searching for "a place where we could build a future" where they would "consider children" down the road. In the interim, they settled on an apartment that hadn't been built yet and the actress made scrapbooks of what she envisioned for her dream home, she said.

"The last time I saw that apartment was when we agreed, with love, that someone had to go," Dunham recalled. "'You can finally eat in the bed without anyone getting mad at you,' he said through tears."

Months later, in January 2020, Dunham opened up about her relationship status to Cosmopolitan UK, telling the publication she was single but that one boyfriend, post-Antonoff, had proposed with the lace of a Timberland boot while they were snowed in at her parents' apartment.

"I'd just had a hysterectomy, I'd broken up with my boyfriend, I was in the process of breaking up with my business partner — I had no business buying a pair of shoes, [let alone] getting engaged," she said at the time.

Lena Dunham Reflects on Her Time in Rehab: 'Getting Sober Changed My Life

She went on to explain that she was taking time away from the dating game.

"Sobriety for me means so much more than just not doing drugs. It also means that I abstain from negative relationships, Dunham, who celebrated three years being sober in April, continued. "It means I've taken a hiatus from dating, which has been amazing for me." 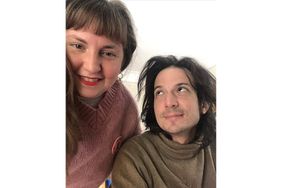