Lala Kent and Randall Emmett are still together, the Vanderpump Rules star clarified on Monday.

Over the weekend, fans began speculating that the couple had split after Kent, 29, posted a quote about her life being "a mess" and making "mistakes" on her Instagram Story. Photos of her movie producer fiancé, 49, had also disappeared from Kent's Instagram account.

As she explained in a follow-up post on her Instagram Story, the quote Kent posted was the Fourth Step Prayer from Alcoholics Anonymous. The Bravo star is almost two years sober.

"My stories are not 'cryptic,'" she wrote. "My last story was the fourth step prayer. One of the hardest steps in the 12 step program. I will continue to post a prayer from the program, each day."

She also un-archived her photos of the couple and posted a new shot in her feed.

"Y'all we didn't break up. I'm petty — so when he pisses me off his photos go to the archive... then I re-add them," she wrote. "I mean, I have this dude's name tattooed on my arm. He's stuck with me."

On her Instagram Story, she added, "It won't be the last time I archive pictures of Rand when he makes me mad. I'm petty AF. It will happen again and again until I grow out of it. & if it's the most petty thing I do, I'm okay with it." (She has previously admitted to scrubbing photos of him from her account in an "angry" moment.)

A rep for Kent had no comment when reached by PEOPLE.

Emmett has also been sharing photos and videos of Kent on his Instagram Story, including one of her and his two daughters with his ex-wife, actress Ambyr Childers.

"Family," he wrote. "Happy time together."

The couple, who co-hosts the Give Them Lala…with Randall podcast, got engaged in September 2018 during a romantic trip to Cabo San Lucas, Mexico.

They were set to wed on April 18 but had to push back the nuptials due to the coronavirus pandemic.

"We have decided to move the date of our wedding to July given the unfortunate circumstances of what is going on," they told PEOPLE in an exclusive statement in March. "We are obviously saddened by this but for the ultimate safety of our families and guests, we have made the decision to wait and see how everything progresses. Safety will always be our number one priority."

It is unclear if their plans for a July wedding will still stand. 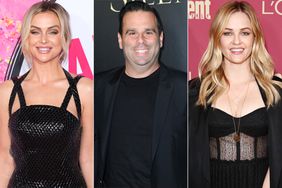