Kylie Jenner is showing off her fit figure three months after welcoming her baby girl into the world.

The new mom and her boyfriend Travis Scott were photographed leaving the Mercer Hotel in New York City together on Tuesday, the morning after they spent a night out on the town at the 2018 Met Gala.

Travis, 26, was snapped walking behind his girlfriend in a blue T-shirt, jeans and blue sneakers, and accessorized his look with two silver cross necklaces around his neck.

Their Tuesday morning outing comes a day after the couple, who welcomed daughter Stormi Webster in February, hit up the Met Gala together on Monday evening, when the Keeping Up with the Kardashians star made her post-baby return to the red carpet.

After sporting a bob wig the last two years, Jenner went for a low key bun this year courtesy of her hairstylist Andrew Fitzsimons. She topped everything off with a vacation glow, after recently getting back from a family trip to Turks & Caicos with Scott and the couple’s daughter.

The rapper wore a black military-style suit with a harness on top.

A source recently told PEOPLE that Stormi’s birth has strengthened the bond between her parents.

“[Kylie’s] relationship with Travis couldn’t be stronger. Having a child together really changed their relationship for the better,” the source said about Jenner, who has been dating Scott since April 2017.

“Kylie spends so much time with Stormi. She’s super proud to be a new mom and is very hands-on,” the source added. “She’s more hands-on than he is, but he still definitely does his fair share to help wherever he can.” 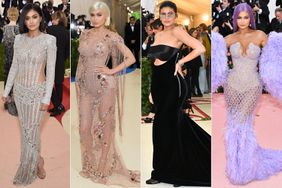